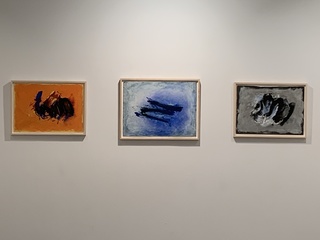 I've wanted to write about Cleve Gray (1918-2004) for some time.  Every so often, I've seen a terrific painting by him in a group show, but whatever solo exhibitions of his paintings that I may have seen at Loretta Howard in the past few years just didn't do it for me. At long last, though, a Gray show has come along that I can heartily recommend.  True, it contains only 17 smaller and less ambitious works, but many and maybe most of them are of high quality.

Called "Cleve Gray: Paintings on Paper," this show is now on view at Anders Wahlstedt Fine Art(through January 16, 2021, and including Dec. 29 through 31). This gallery  specializes in works on paper, and is now located at 521 West 26th Street, in the space formerly occupied by Loretta Howard. Howard herself continues to do business online, and in her capacity as representing the Gray estate, is co-sponsor for this show.

Gray seems to have been nothing if not complicated.   This may explain the wild variety to his lifelong output, but certainly nobody can say he was stupid or poorly educated.

Nor did he lack for comparably cushy artistic instruction along the way (his mother having long been a supporter of his artistic ambitions, though his father wanted him to become a lawyer).

At Princeton, he majored in art and archeology, studying painting with a now-forgotten artist named James C. Davis, and Far Eastern art with George Rowley, an authority on the subject who rated an obituary in the New York Times when he died in 1962.

Rowley seems to have instilled in young Gray a love of Chinese and Japanese art that would surface in his later years as a truly abstract painter, while Gray returned the compliment by asking Rowley to be best man at his wedding in 1957.

Shortly after graduating from Princeton (and following his first solo exhibition), Gray joined the U.S. Army and saw active duty in Britain, France and Germany during World War II. After the liberation of Paris he hung around and began informal art training with two aging cubists, the French artists André Lhote (1885-1962) and Jacques Villon (1875-1963).

Neither had been close to Picasso or Braque, whom I might style the Montmartre or intuitive branch of cubism.  Instead, both belonged to a group based in Puteaux, a suburb of Paris; most members of the Puteaux group (Fernand Léger excepted) seem to have tried to "understand" cubism by more "rational" means.

The best-known "masterpiece" produced by the Puteaux cubists is "Nude Descending a Staircase" (1912). It's by Jacques Villon's brother, Marcel Duchamp, and is an attempt to "explain" cubism by likening it to the multiple exposures of moving animals or people by photographers like Étienne Marey (in France) or Eadweard Muybridge (in the UK and U.S.).

Another product of the Puteaux cubists was a book, "Du 'Cubisme'" (1912) by Albert Gleizes and Jean Metzinger which similarly tried to "explain" cubism as many different views of the same subject.

Neither Gleizes nor Metzinger were very good painters but they and/or other members of their group exhibited their "cubist" works at the Salons in the early years of the 20th century – and because Picasso and Braque did NOT exhibit in the Salons, many members of the public got a very misleading idea of what cubism was all about.

Later on, Cleve Gray would return to Paris and study Parisian art further on the GI Bill of Rights, but the instruction offered by Villon and Lhote seems to have been what stayed with him longest and sunk in deepest, because right through the 1940s and as late as 1960 he kept on painting "rational," semi-representational cubist paintings.

He never seems to have had any trouble getting shows and his work was even admired by some critics. Not least was it admired by John Canaday, who was senior critic on the New York Times for 17 years starting in 1959 and whose hostility toward modernism in general and abstract expressionism in particular was so clear and infuriating that at one point a round-robin letter to the Times denouncing him was signed by 49 art figures.

Canaday loved Gray's cubist "reason" and contrasted it with the "chaos" of Pollock and "action painting," saying in one 1960 review that Gray was where the "real avant-garde" was.   Gray wrote a letter to the Times defending Canaday at the time of the round-robin denunciation; he also authored an anti-ab-ex article of his own in 1959 in The American Scholar entitled "Narcissus in Chaos."

Yet at some point, Gray's views began to alter and he began to paint purer, more abstract and yes, maybe even abstract expressionist paintings himself – if one qualifies this by saying that chronologically they must be described as second-generation ab-ex – and rather belated second-generation at that.

Gray's changeover seems to have happened sometime in the mid-1960s, more than a decade after other younger painters had begun following the lead of the first generation.  Still, there it was – by the later 60s, Gray was coming up with full-throated, often very gestural but also remarkably post-painterly '60s abstractions as daring as anything else going.

By 1970, he had been taken on by Betty Parsons, the gallery that had exhibited Pollock, Rothko and other trail-blazers. Adopting this new style must have taken some doing, too, as Gray was no spring chicken – turning 50 in 1968.

It's difficult for me to know exactly when this changeover happened, since I can't go into the warehouses where all his paintings are stored.  Still, some clues are provided by the current show at Wahlstedt. Gray liked to work in series, and the show includes works from five different series, ranging in date from 1966 to 1980.

It is very handsomely hung, with the paintings "floating" In the centers of their frames (in other words, as with Anne Truitt's works on paper, the work is separated from its frame by a strip of air).

With the sole exception of one slightly larger painting hung in the adjoining office space, none of these paintings are very large, averaging at most about 24 inches by 18 inches (or 18 inches by 24).

All use acrylic, though some are listed as "mixed media" because they also include India ink and/or marble dust.

All the paintings focus upon a central, darker image in the center of the piece of paper, surrounded by a lighter and sometimes brighter field. The first two on the checklist, from the "Reverse Drawing Series" still look a little awkward, but the next three, from the "Greece Series," are also from 1966, and are much more confident and lively.

I especially related to the second and third of these, a pair titled "Ceres Diptych." It consists of two neatly centered but irregularly shaped images on vertical sheets of white– each done with just a few carefully placed strokes of a clear bright yellow and an equally clear blue in their centers.

They convey an indefinable sense of birds flying or hands praying or who knows what?  Perhaps a Japanese ukiyo-e print as well – in other words, richly suggestive for all their simplicity.

Also appealing are the horizontal pair called "Conjugations" (1975), from the "Vermont Series." Each has a curled-up black-and-white shape mounted on brown paper.  The central images look like a cradle or a small crustacean of some sort, but again they are very neatly done – an indefinable mingling of Eastern and Western traditions.

The most striking layout is three paintings that hang in a row on the wall facing the gallery's entrance. All are horizontals, and they suggest but do not insist upon the three primaries.

On the left is "Jerusalem III" (1976), from the "Jerusalem Series." The field is bright orange with yellow edges, and the central image is a combination of red, brown and blue.

In the center is "Roman Wall (blue)" (1979), from the "Roman Walls Series."   Just three masterful blue strokes in the center, on a field of lighter blue and white.

To the right is "Conjunction II" (1980), also from the "Roman Walls Series."   The center is black with blue and white accents, on a field of gray surrounded by brown.

I can't begin to speculate on what caused Cleve Gray to evolve from cubism to second-generation ab-ex.  I can only say that at the end of this evolution, he may have felt more at home in his social surroundings, given the family he'd married into and their connections.

In 1957, he'd married Francine du Plessix (Gray), who went on to become a distinguished author and journalist.  Francine's mother was Tatiana du Plessix Liberman, known professionally as "Tatiana of Saks," an exclusive designer of ladies' hats for Saks Fifth Avenue.

Thus the du Plessix-Gray marriage was star-studded from the beginning: one of the wedding guests was Marlene Dietrich.

Thanks to Liberman's sophisticated taste, Vogue in his day easily outshone its rival Harper's Bazaar in its coverage of the visual arts.

The Liberman "salon" was also one of the most distinguished and admired gatherings in Manhattan, with art-world celebrities especially galore, from Greenberg on down.

I was only invited once, but it was a memorable occasion for me. I was talking to a still- quite-young Michael Steiner.  He was saying how he hated big parties and never knew what to say. I was assuring him that everybody felt uncomfortable at big parties when an elderly, bespectacled man crossed the room, threw an arm around me and said, "Will you marry me?"

Instead of answering him, I turned to Steiner and said, "See what I mean?" The elderly gent took his arm off me and charged away to another part of the room.  "Who was that?" I asked Steiner. "Rothko," he said.

I have every reason to believe that Helen Frankenthaler had gotten me invited to this party (this was shortly after I'd written about her for Time).  And (reading between the lines a bit) I gather that both she and her then husband Robert Motherwell seem to have been not only well-known at the Liberman salons but more importantly good friends with Cleve and Francine du Plessix Gray.

Another artist who became good friends with Gray in the '60s was Barnett Newman; indeed, some authors give him the credit for turning Cleve Gray around…….

.....but after all, what does it matter?  All these personal connections are tantalizing to speculate about, but at the end of the day what matters is what the art looks like, and this show offers Cleve Gray's looking grand.

His work has an Asian calligraphic feel and you mention that he studied Chinese literati painting and calligraphy. But he is more familiar with Schools of Paris and Manhattan ( Fautrier-Frankenthaler) than Ab Ex Motherwell or Gottlieb who both knew Asian art better, as is seen in their painting and works on paper. They are being taken up now by mid-career Chinese abstract painters who practice calligraphy like musicians practice scales.
You speculate that he had more to do with Manhattan chic than anything. But his art and the Wahlstedt hang look better than that, as is the best of your review.
Rothko was probably pissed, and with all those arty Manhattanites.

As a sometime resident of China, David Evison brings a unique perspective to his comments. Thanks, David!

But you know, Rothko didn't have to be pissed (by which I assume you mean drunk) to make a pass at me in 1969 -- at 34, I was a lot more attractive to look at than I am at 85 -- and I was wearing a mini-skirted dress of white chiffon with a pattern of big circles of pale blue and pink scattered over it....

IN UK English vernacular pissed can mean drunk but also , tired of, irritated by and usually spoken pissed off (with).