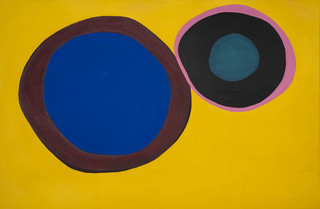 I don't have much to say about "Jules Olitski: Color to the Core: Paintings 1960-1964" at Yares Art on Fifth Avenue (through January 30).  That is partly because I have often written about Olitski, and his enormous talents are well-known to many if not most of my readers. It is also partly because I want to post this review as early as possible in the new year, in hopes of alerting more viewers in time for them to get to the show itself.  Let nobody think I don't admire it!  Au contraire, I found it sensational, a terrific feast for the eyes and strongly recommended in fair times or foul.  Don't miss it!

The 42 paintings on the checklist --- which occupy both galleries at Yares (on either side of the elevator) –-- are all from a relatively early stage in the artist's mature career, when he was between 38 and 42.

True, he had already experienced much training and many vicissitudes – I remember him hinting bitterly in conversation of the anti-Semitism he experienced during World War II – in the U.S. Army, of all places.

I also seem to recall an article in Partisan Review where he wrote feelingly about how hungry he got in the postwar period – if I remember correctly, this was after he returned from living in Paris on the GI Bill and before starting to teach at C. W. Post.

Then again, his fortunes turned after he landed his first solo New York show at Alexandre Iolas in 1958 and Clement Greenberg signed the guest book. This led to two solo shows at French & Co., in 1959 and 1961 (Greenberg was acting as an advisor to French & Co. at that point).

Further recognition included an award from the Carnegie International in 1961, and a teaching job at a far livelier & more prestigious educational institution, Bennington College, between 1963 and 1966.

Sometime around 1960, Olitski had abandoned the heavy, dark "matter" paintings that he had been making and that had somehow evolved out of his Paris experience.

Instead, he began applying thinned and brilliantly-colored paint in deft, hard-edged and only seemingly simple compositions to his canvases.

But the pictures that Olitski made, using the technique, didn't – and don't -- look like anybody else's. Instead, they are the "core" paintings that constitute the current exhibition.

It's very hard for me to choose which paintings stand out more in this exhibition, as virtually all are of a superior caliber. The colors are rich and dark – or light – and haunting.

I will say that these works are all composed around circles, and that there seems to be an evolution from smaller circles which fit readily inside the canvas edges to larger circles, of which only a segment can be seen.

Characteristic of the earliest phase might be "After Five" (1961), in which a huge fat commanding ring of mostly red but with an apologetic patch of green in it floats on a navy field.

Characteristic of the later phase might be "Fatal Plunge Lady" (1963) with what looks like the curve of a huge female breast (red) below which sits a short stroke (green) in the nipple position.

As a classic that bridges the evolutionary spiral, we have "Patutsky Jazz" (1963), which is a narrow vertical of green with an egg-shaped oval of purple sitting at the bottom and a smaller red circle within it, implying a yolk.

To the extent that these paintings incorporate circles, they resemble the nearly contemporary paintings of Edward Avedisian, which were exhibited in September at Berry Campbell and which I reviewed at that time .

However, in that review I likened Avedisian's paintings to lighter, cheerier kinds of circles – suns, moons, stars, faces and bouncing balls.

Olitski's circles are broader, more aggressive somehow and far more authoritative or determined, especially when they capture other, smaller egg-shapes inside of their orbits. Many of them remind me most of the craters of volcanoes, seen from the air.

Somehow the word 'gravitas' springs to mind in connection with Olitski's circles -- which means, according to google, "dignity, seriousness and moral rigor," and is also billed as "one of the ancient Roman virtues."

At the same time, an electric kind of energy surges through them, making them joyous as well as serious.   And it is all done with the most muscular and triumphant colors.

Many different colors course through this show, though each painting incorporates only a small number of them-- somewhere between three and six at most.

A voluptuous pink is one color that Olitski clearly felt strongly about.  Likewise a rich chocolate brown,  and a verdant green.

For me, though, the painting that says it best -- at this particular moment in time -- is "Fair Charlotte" (1961).   It has two circles, the larger one outlined in maroon and with a blue center, the smaller one with three concentric circles --pink on the outside, then black, and then green.   This rich assemblage floats in a large and buoyant field of rich lemon yellow: it puts me in mind of the sun coming up on a new day.

P.S.   This show has an elegant catalogue, with essays by Alexander Nemerov and Patricia Lewy.  However, because I have so recently written about other catalogues, I am saving the Olitski catalogue for future consideration. P.H.