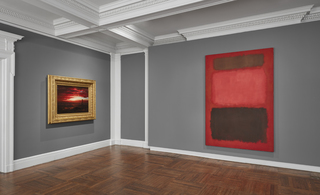 At Mnuchin on East 78th Street we have "Church & Rothko: Sublime" (through March 13).   This show combines 17 small- to medium-sized paintings by Frederic E. Church (1826-1900), the second-generation Hudson River School painter, with eight medium-sized to large paintings by Mark Rothko (1903-1970), the first-generation abstract expressionist.  From an ideological point of view, it is an interesting and provocative combination, worthy of the discussion I hope to give it. Visually, though, it is nolo contendere.

While the Churches are mostly sweet little pictures, the best of the Rothkos tower over them, qualitatively as well as in terms of square footage. The juxtaposition provides ample explanation for why European critics and art lovers didn't pay serious attention to American painting until after World War II.

Both of them schooled me well, and although I'm sure that over the years, I have forgotten much of their excellent tutelage and come up with some (no doubt highly questionable) theories of my own, I am going to take my grad school experience as my point of departure, instead of that offered by the gallery in a handsome catalogue that (so I understand) is the handiwork of another scholar of nearly the same generation, John Wilmerding (b.1938).

As Professor Staley explained it to us, landscape painting in England in the late 18th and early 19th centuries was often discussed in terms of – and to a certain extent influenced by—a pamphlet published in 1757 by Edmund Burke (1729-1797) a politician as well as a philosopher.

This pamphlet had a jaw-breaking title: "A Philosophical Enquiry Into the Origin of Our Ideas of the Sublime and Beautiful."   I have never read it myself, but as I understand it, Burke set up this duality between the sublime and the beautiful – arguing that each could be defined in terms of emotional and physical characteristics in landscapes as well as paintings of them.

To wit: the beautiful was life-enhancing, the sublime was life-threatening.

A beautiful landscape had gently rolling hills, placid blue skies, calm seas, and a place for everything with everything in its place. It evoked feelings of serenity and even love.

A sublime landscape, on the other, inspired terror and fear of death.  A sublime landscape had tall, rocky mountains, cloudy or stormy skies, and wind-tossed waters, with large waves and a shipwreck either imminent or a fact.

In the late 18th and early 19th centuries, middle-class English tourists began to look for and visit landscape sites in England that were beautiful, sublime – or something in between.

They were aided in their search by another writer, William Gilpin (1724-1804). In the 1780s Gilpin began to write a series of pamphlets dedicated to what he called "the picturesque."  The picturesque was midway between the two extremes of beautiful and sublime, combining the most likeable aspects of both.

In terms of landscape painting, English painters had two main Continental models they could draw on (and many did).

The beautiful was epitomized by the idealized landscapes of Claude Lorrain (1600-1682), a French painter of the baroque period who always used framing trees at the sides of his compositions and an open space toward the center.

His work was tremendously popular among painters of many nationalities and widely copied, but painters looking for earlier "sublime" precedents could model themselves on Salvator Rosa (1615-1673), an Italian painter of the baroque period who painted gloomy windswept landscapes.

He wasn't as good a painter as Claude but for those who associate gloomy windswept landscapes with the Romantic temperament (and peacefully lovely landscapes with 18th century rationalism) Rosa can be seen as anticipating 19th century Romanticism.

In terms of 19th century landscapes, Staley was a fan of J. M.W. Turner, whom I would classify as a prime example of the sublime, with all his wind-swept seas and towering mountains.

I, on the other hand, favored – and continue to favor –Turner's greater contemporary, John Constable, whose more humble and mostly placid views of the fertile English countryside, with their rustic buildings and sturdy little farm workers, seem to me somehow to capture the epitome of the beautiful.

Taking this on up to the 20th century, I have long been willing to award Rothko the title of "king of the sublime," if only because I knew that so many viewers told him that they were moved to tears by his paintings.  I find in doing a bit of online research for this review that the artist himself welcomed this response.

According to one book about him, he said that he was not interested in being known merely as a colorist, but "only in expressing basic human emotions – tragedy, ecstasy, doom, and so on.   And the fact that a lot of people break down and cry when confronted with my pictures shows that I can communicate these basic human emotions…."

In a 1958 speech at the Pratt Institute, he discussed art as a trade and offered – doubtless in something of a satiric vein – the "recipe of a work of art – its ingredients – how to make it – the formula."   Of the 7 ingredients he listed, this was No.1: "There must be a clear preoccupation with death – intimations of mortality….Tragic art, romantic art, etc.…deals with the knowledge of death…."

(This must have been how Rothko saw himself, and as the show at Mnuchin deals only with him as one abstract expressionist, and concerns itself with the death-oriented sublime, I will only note in passing that ab-ex also offers at least one great example of the life-oriented beautiful: Jackson Pollock, with his nearly infinite associations to the world around us.

Instead of crying in front of Pollock's paintings, viewers are more apt to laugh – like two young men I once saw at MoMA, howling in front of "The She-Wolf."  I know that such laughter should properly be considered a philistine response – but at least the viewer is left in an up-mode, instead of a downer, with an expression of elation and even joy, not sadness.   But enough of that.)

How does Church fit into the ideology of the sublime?  In his biggest and most famous paintings he tried hard to be as grand and bombastic as Turner.  His monster canvas of Niagara Falls and "The Heart of the Andes" were staged like theater productions when they "premiered" in New York. Lit by gas jets, they were admired by packed houses of art-lovers who paid for entrance.

The paintings in the Mnuchin show are all much smaller, more nearly fitting the category of "appealing" as opposed to "grand."  They owe whatever claims they may make toward being "sublime" to their dark and gloomy color schemes.  Seas and/or shores are so dark as to be nearly black, and the only light in the picture is a small bright yellow rising (or setting) sun, with surrounding clouds most often a garish red.

Still, these paintings also are mostly compositionally related to Claude, that modest apostle of the beautiful, since nearly all sport that telltale Claudean framing tree.  In sum, they are as much "picturesque" as "sublime."

In her course on American painting of the 19th century – and in her climate-altering book with the same title, originally published in 1969 – Barbara Novak brought art-world attention to the alternative "luminist" tradition of American landscape painting, especially Fitz Hugh Lane and Martin Johnson Heade.

At her best, she had a great eye: these small pictures are unassuming and peaceful yet truly memorable, worthy American counterparts to Constable (and sharing his orientation toward the beautiful though they look nothing like his paintings).

On the other hand, I found Novak's literary & theoretical arguments justifying her choices difficult to follow and 19th century American writing on art in addition a forest of non-sequiturs.

One term paper I did for her (its topic chosen from a list of her suggestions) dealt with the concept of "sentiment." I ploughed through a quantity of 19th century American art writing in an attempt to find a consistent meaning for that term.

After I'd finished, I happened to visit a delightful emerita, Eleanor Tilton, who had been my advisor for my (undergraduate) senior thesis at Barnard (though the thesis was on T.S. Eliot, her real area of specialization was 19th century American literature).

She expressed an interest in reading my paper on "sentiment" and after she had done so, politely suggested that these authors hadn't known what in the world they meant by "sentiment" so they used it for all sorts of situations and artists.

I suspect that 19th century American art writers similarly utilized words like "sublime" and "picturesque" without a clue as to their origins or true meaning and significance…..something like how the word "awesome" is commonly used today.

Moreover, much as I admired Novak's choices among 19th century American painters, I was irked by the epilogue on the 20th century in her book.

Not only does it deal with pop art instead of color-field (understandable, especially since she was married to a conceptualist artist).  More seriously, among the abstract expressionists only Rothko got a color reproduction; Pollock and de Kooning were relegated to black and white.

This same favoring of Rothko over Pollock characterizes another book popular with trendy academics when I was in grad school, "Modern Painting and the Northern Romantic Tradition: Friedrich to Rothko (1975)" by Robert Rosenblum.  It irked me, too, as in its revisionist way, it (speciously) re-routed the development of 20th century modernism away from the truly radical (and more abstract) tradition of Paris and toward the more conservative (and more figurative) tradition of Germany and Scandinavia.

Though I didn't know it then, the forerunner of this book was a 1961 article by Rosenblum in Art News entitled "The Abstract Sublime." Roberta Smith, in her December 4 review of the Mnuchin show, saw Rosenblum's arguments iin this article as germane to it.

All that said, how does the show itself look? Like a prime example of impressive staging, with a number of grand Rothkos to set it off.  The largest selection of  Rothkos is in the upstairs part of the gallery, which (like the rest of the space) has olive gray-green walls with crisp white moldings but (unlike the downstairs) is quite brightly lit.

On view (in addition to many Churches) is a spacious yellow, orange and pink untitled Rothko oil on canvas from 1960, hung on the curved wall facing the stairwell.  A somewhat smaller "Orange Red Yellow" oil on canvas from 1956 and a quite small (also orange red & yellow) untitled oil on paper from 1959 are in the back upstairs gallery.

The entrance gallery on the ground floor is the most imposing. It displays just three paintings, including a small very dark late (1968) Rothko tempera, the largest and most dramatic Church, "Marine Sunset (The Black Sea)" (1881-82) and a large and superb Rothko oil from the artist's finest period, "Browns and Blacks in Reds" (1957).

The black & red color scheme of the paintings is well set off by the olive gray-green walls – maybe because the lights are kept way down low.  This creates the gloomiest possible mood, relieved only by the wide gold frame of the Church and the white trim of the moldings.

In my notes I find scribbled, "Das Untergang des Abenlandes." This is the title of another book I have never read, but I know it was originally written in German by Oswald Spengler.

It was published in the wake of World War I, which had brought about the downfall of Germany's Kaiser Wilhelm and his autocratic Prussian monarchy.  As a German, Spengler may well have felt that this looked like the end of Western civilization, yet so far in the century since we seem to have stumbled on.