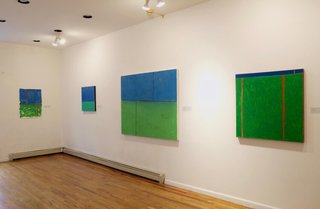 Certain exhibitions leave one with a happy feeling.  This isn't always because every picture in them is a masterpiece.  It may be because one gets the feeling that the artist had fun making the work on view: that even when he may have been fooling around, he was experimenting. And isn't experiment what modern art is supposed to be all about?

If you want to see such a show, you need to get to "Gerald Jackson: Recent Releases, II" in Wilmer Jennings at 219 East Second Street quickly. That is because due to the pandemic I was only able to get there myself last week, and the show has only a week more to run—from Wednesday to Saturday, 11 to 6, through January 30.

Gerald Jackson can be an elusive figure. I first saw a small canvas by him that I admired in 1996, when it was included in a group show organized by Randy Bloom at Steve Cannon's gallery, a gathering of the tribes.  A year or so later, Cannon invited me to organize a show at tribes, and I wanted to include work by Jackson in it—but he was nowhere to be found.

Fast forward.to 2016 and I once again caught up with him.  This time he had organized a show of fourteen 21st century women abstract artists (plus himself) for Rush Arts, a Chelsea gallery.

I reviewed the show and reproduced with it the abstract painting by himself that he'd included. This painting combined the colors blue and green, with a rectangle of green below and a rectangle of blue above, plus a few brownish vertical lines rising through these fields at one side or the other to offer complimentary accents.

Are you ready for this, folks?  In the current show at Wilmer Jennings, 36 of the 42 works on view are pictures that feature blue and green rectangles and all or almost all of them have the green below and the blue above.

How, you may ask, can I possibly find this fun, let alone experimental?   Before I try to explain, let me fill you in a little bit on Gerald Jackson's life and times.

He was born way back in 1936, in Southside Chicago.  His father's family was in the numbers game, but his mother encouraged his interest in art.  After a year attending night school classes at the School of the Chicago Institute of Art, plus a year or three in the U.S. Army and some time spent hauling bags of mail for the U.S. Post Office, he lit out for New York City around 1962, and  there found a community he  liked.

This was not, however, in Harlem but in the East Village and its environs. Although it had a sizeable African-American contingent, it was more heavily invested in the arts than Harlem as a whole and correspondingly freer and more Bohemian. Initially it was the musicians who attracted him, Jimmy Hendrix & Charlie Parker, but it also had African American artists, starting with Joe Overstreet & Bob Thompson --  and as time went by, also Al Loving & Peter Bradley.

All of this info I take from a long interview of Jackson conducted in 2016 by Fellow Artist Stanley Whitney for the Oral History project of BOMB magazine (posted online).  The interview makes clear that the African-American artists in the East Village in the '60s didn't mingle with the Abstract Expressionists to any major degree. The Ab-Ex club had been the Cedar Tavern in the 50s, and for the African-Americans, the club of the 60s was Slug's.

Still, Jackson seems to have picked up a lot of insight into abstract painting –by osmosis as well as a season or two at the Brooklyn Museum School. And, in addition to learning how to paint abstract, he somehow learned about Clement Greenberg and the psychoanalysis of Sigmund Freud.

Throughout the interview with Whitney,  references to Greenberg and Jackson's own "subconscious" (or lack of it) crop up regularly, though it isn't clear whether the artist knew Greenberg personally or only through his writing, and never clear whether he spent time on the couch or only reading Freud.

He also picked up knowledge of Asian religions, for the Chinese ascribe great properties to blue and green.  Whether seen separately or together they are believed to have curative powers -- associated with health, harmony and prosperity.

To Western eyes, this combination may simply be described as a combination of the blue sky above, and the green grass below.   In any event, that is my association.

Not all of this show is blue & green.  In one of the four galleries at Wilmer Jennings, seven big collages are tacked to the walls, incorporating drawing, reproductions of Old Masters, blown-up photographs, sheets of music, pages of poetry and so forth. They serve as a reminder that the artist can do figurative as well as abstract.

However, it is the 36 variations upon blue and green which makes the show such a pleasure.  Jackson first developed the idea of blue and green together in 1989, but he only returned to it in depth in 2014.

And what a range he has since endowed it with!  It reminds one of the many variations that Rothko was able to invest his signature image with.

In Jackson's show are a few large paintings, a lot of medium-sized ones, and rows of delightfully small ones.  Sometimes the green is bigger than the blue, and sometimes it's the other way around. Mostly, it's a clear viridian and a clear cerulean, but sometimes we get chartreuse or mint and sometimes sky-blue or navy.

Sometimes there are just one or two darker or lighter lines up and down as well; sometimes there are rows of little boxes of color like jeweled necklaces to highlight the solid colors. Most of the time, the blue and the green are in the same picture, but sometimes they are mounted separately, to create diptychs.

Most of these paintings are acrylics on canvas, but some are acrylic on board. The most effervescent are on paper -- not using solid colors, just cross-hatching over a black-and-white field, and not framed or mounted on anything -- just pasted to the wall.  I'm not  daring enough to want one of these paper ones in my home, but in the gallery, surrounded by all the other blue-and-green paintings, they are like fireworks going off!

Gerald Jackson Recent Releases II @Wilmer Jennings Gallery is a most satisfying and inspiring exhibit. Each piece is fulfilling, like watching the sunset; one never tires of Mr. Jackson's thematic statement of the Blue/Green harmony.