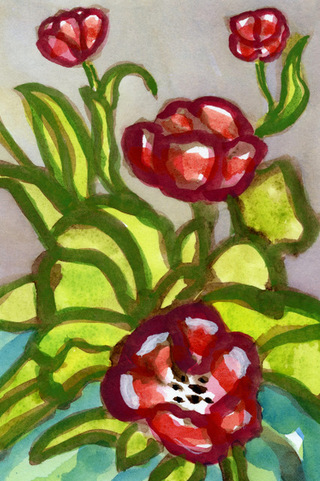 For some years now, I have been hot on the trail of an elusive group of realists (yes, realists).   This group calls itself Zeuxis, in honor of the ancient Greek painter whose art was so true to life that birds pecked at his pictures of grapes. At long last Zeuxis (the group, not the ancient Greek) is having a show at First Street (which is actually at 526 West 26th Street).  And, unlike so many of this group's shows, this one will be up long enough so that my readers can go and see it for themselves.  It is called "Composing in the Key of S" (through May 22), and I found it highly enjoyable.

With two exceptions, the members of Zeuxis have taken the "S" in this assignment to stand for "still life."  This means the ghosts of Renoir, Cézanne, Matisse &  Bonnard hang in the air over most (though not all) of these pictures.

But shucks, I'd rather be haunted by such peerless masters than I would by so many more popular ghosts – early Duchamp, say, mid-career Koons or late de Kooning.  No indoor plumbing, no smart-ass jokes, no sloppy semi-abstracts here.

Instead, we have a world of just plain honest representational painting.  This is very refreshing – but also an object lesson in how even the simplest-seeming assignments can be more difficult than the untutored observer might suppose.  Most but not all of these 30 paintings come off -- despite (or perhaps because of) the fact that with only a few exceptions, the medium used is the highly traditional one of oil.

A few of the best paintings here are quite elaborate: most notably "A Bunch of Bananas"(2021) by Clara Shen, which graces the show's announcement card. This is a seascape with a small vase of flowers and a sizeable crescent-shaped basket of fruit in the foreground (the bananas in the title hang from the basket's arc-shaped handle).

Also among the best more complicated paintings is "Setting for Two" (2019), by Mary Prince.  This one effortlessly integrates the forms of a pitcher, placemats, plates and cups on a tabletop to create a neat, quietly persuasive whole.

There are quite a lot of middle-sized, less elaborate paintings here, too, including many of the show's more notable successes.  Here I'd list Neil Callander's "Winter Geranium" (2017), whose precisely-rendered leaves form a springy, elegant pattern.

I'd also include Megan Williamson's "from the bottom of the Sea" (2021), a simple but effective display of palely-colored blue, yellow and white shells against a russet field.

Finally, to my list of middle-sized, less elaborate successes I'd add the somewhat minimalist rendering of a clear jar, a purple bottle and a round of tubing by Phyllis Floyd, in "Plastic Objects #2" (2021).

The largest painting here is "Across the River" (2020) by Elizabeth Higgins.  It measures 40 by 30 inches, and depicts the view toward a river seen through a tall, wide open door or French window. To me, it looks more like a seascape than a still life (maybe this is the "s" that justifies its inclusion, though its title suggests that this is a river we're looking at, not the ocean??).  To me, it's still a gracious and amiable picture.

At the opposite end of the show's range in scale, we have "Motor"(2019), by Matt Klos.   It measures only 9¼ by 12 inches, but is more notable for the piquant way it modishly combines a very traditional style with a totally contemporary subject.

What I consider the other non-still-life painting here (beside Across the River") is the one by Sheldon Tapley named "S" (2015).   In this case, "S" stands for "skull," and the image is nothing but this heaviest bone in the human body, shown against a darker field.   Alas, poor Yorick, thou shouldst be living at this hour!

You may be wondering about the picture I have singled out as "best in show."  This is "Tulips in Vase" (2021), a watercolor and egg tempera on paper, measuring only 9 by 6 inches.  It is by Franklin Einspruch, and as his name may be familiar to some of my readers, I feel a little "full disclosure" is in order here.

Einspruch is not only an artist, but also an art critic and editor.  One of his most recent editorial creations was a webzine called "Delicious Line."  To this publication I contributed two reviews and he paid me for them!  Not much, but still it was cash. On the other hand, this was remuneration for labor performed, not baksheesh, and I had no idea that I would ever be reviewing his painting.

The fact that I like "Tulips in Vase" as much as I do has more to do with what I see as a community of interest between this artist and myself.  Although this is a representational painting, and all the work by Einspruch that I have ever seen was representational, as a writer and editor Einspruch has often dealt with abstract art as well.

In fact, although his own artist-website is hazy about his background and education, he is still listed as the keeper of the Walter Darby Bannard Archive.   Moreover, to the best of my knowledge in his youth he learned one heck of a lot about art from Bannard himself – in other words, from an abstract painter of the most formalist kind.

"Tulips in Vase," although dealing with a recognizable subject, arranges its flowers, stems and leaves in what might almost be called an abstract design.  Since the painting is still representational, the result may look more like Art Nouveau than Pollock but however you want to label it, its subtle but powerful re-arrangement of natural forms lends unity, movement and even an electric energy to it.