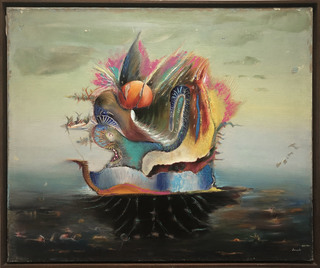 New York in the 1940s was a surreal city, bizarre and unreal because there was a war on and because so many Parisian surrealists had come to it to escape that war. In 2021 the Covid-19 pandemic makes New York seem even more surreal & bizarre – everybody's worst dreams come true.  So what could be more appropriate than "Enrico Donati: Surrealist Paintings from the 1940s" at Washburn (through July)?

Donati was not an automatist, to the best of my knowledge, but neither did he follow the low road of Dalí, Magritte, Tanguy, Delvaux and others in creating academic figurative compositions based on their art-school training, with modelling and shading correct.

Instead, he carved out a modest but surprisingly individual niche for himself with spongy, fungiform little shapes that float in a liquid ether.  Maybe underwater sea life – somewhere between animal, vegetable or mineral  -- best describes most of these little shapes he dreamed up, but whatever you want to call them, they also hover somewhere in that tantalizing area between abstraction and representation.

Donati's surrealist style seems to have been an American invention. A contemporary  of the first generation of abstract expressionists, he was born an Italian -- in Milan in 1909.  First, he studied economics at the University of Pavia.

Then he decided he wanted to become an artist and gravitated to Paris.  There his studies included a stint at the more conventional Academy Julian.  Though surrealism was flourishing all around him in Paris, he himself didn't become a surrealist – yet.

He only converted after he fled to New York.  The CV provided by Washburn says that he furthered his studies at the New School for Social Research in Greenwich Village, and I can't help wondering if Stanley William Hayter didn't provide the final fillip.

I don't know if Hayter, a British-born surrealist painter & graphics artist, was teaching courses at the New School, but he had set up there the American version of Atelier 17, the graphics workshop he'd founded in Paris.  Moreover he played host there to other émigré Parisian artists as well as fledgling 'Americans  like Motherwell and Pollock.

At any rate, Donati became a surrealist in America, winning the approval of Breton – apparently from his first solo exhibitions in New York in 1942 and 1943.  Breton and most of the émigré Parisian artists went back to Europe when the war ended, but Donati elected to stay in America, eventually dying in Manhattan in 2008 at the ripe age of 99.

Nevertheless, Donati continued to create art throughout his life, and his work has been exhibited since his death as well.  The Washburn CV lists 86 "selected solo exhibitions," up to and including this one – but hardly limited to New York. In the U.S., Donati also had shows in Los Angeles,  Chicago, St. Paul MN, Cambridge MA, Syracuse and Chattanooga – while abroad his work has  been seen in Florence, Venice, Rome, Munich ,Brussels, Paris – and so on and on.

There is something subtly bewitching about these neat little carefully constructed oil-on-canvas fantasies at Washburn.  They begin from recognizable subjects but then impishly lift off   to become something else instead of --  or as well.

For instance, "Le Rêve de Pegase" (1946) kicks off with a horse-like head, floating in mid-air, but then opens up to reveal a mammoth, beet-red brain. Or is it a beet – and not a brain – after all?

"La Naissance du Coq" (1945) has a dark green sea beneath a large pink shape that looks more like a giant foot than it does a rooster -- except that it has a mouth-like aperture near its top and a row of question marks over at the right.  What in the world is it supposed to be? Mystery prevails.

"Bateau Ivre" (1942) takes its title ("Drunken Boat") from a poem by Rimbaud, the 19th century French Symbolist,  It centers on what could be  a boat but looks more like a motorized raft, chugging across uncharted seas.

On top of the boat/raft is a giant bird-like form, and on top of the bird, a huge flowered hat.   This makes three totally unrelated images, but in the realm of dreams, so it would appear, it all makes (surreal) sense.