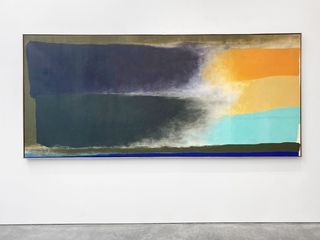 I'm enthusiastic about the paintings of the great modernist painter Friedel Dzubas, and happy that he's had a show in Manhattan in all but one of the past five years. I've reviewed every one of these shows, as well as publishing the review of a book about him in 2020, the year he didn't have a Manhattan show. I'm happy that Leslie Feely is enabling me to keep this string of reviews unbroken by staging "Friedel Dzubas, 'Color Release:' Paintings from the Lipman Family Collection"  at a Special Exhibition Location, 507 West 27th Street, (through May 31,  Tuesday through Saturday, 12 to 6). My only problem is that I'm running out of fresh things to say, and I hate repeating myself.

What – or who – is the Lipman Family?  Seems they are the heirs of Ira A. Lipman (1949-2019), a native of Little Rock, Arkansas who in 1963 founded Guardsmark.  Based in Memphis, Tennessee, Guardsmark was a privately-held security firm which at one point employed around 19,000 people and generated $500 million annually in revenue.

The company was founded to help hospitals and factories protect themselves from theft and other losses, and was known for its insistence on hiring only qualified employees (at a time when rival companies often didn't bother with background checks and as a result sometimes hired people with criminal propensities).

By 2015, when Guardsmark was sold to Universal Protection Service, it was providing neighborhood patrols, home protection, bodyguards and other services. At this time, it had its executive offices in New York as Lipman and his wife, Barbara Kelly Lipman, had moved to the Big Apple in 2002 (corporate headquarters remained in Memphis).

According to an obituary in the New York Times by Sam Roberts, Lipman was already a footnote to history by 1957, when he was 16. The state's governor, Orval Faubus, and white protesters, were trying to prevent nine African American children from desegregating Little Rock's Central High School, where Lipman was a student.

Faubus called out the state's National Guard to support the protest – and President Eisenhower sent U.S. troops to protect the students.  The situation attracted the attention of the national media, including NBC's John Chancellor, and Lipman became Chancellor's "mole," feeding him reports on what was going on inside the school via pay phone.

Lipman became such an authority on security that he wrote books about it and was called upon to testify about it before Congress.  In the 1990s, he was already calling for better security at airports, such as metal detectors to screen passengers, closer attention to carry-on luggage, and special identification cards for frequent flyers to speed them through checkpoints and free up the guards to scrutinize more problematic passengers.

Then came 9/11, and suddenly the federal government woke up to the problem -- enacting many of the proposals that Lipman and others had been calling for.

More to the point here, Lipman loved art and beautiful things.  In addition to endowing professorships and a prize for excellence in journalism, he collected rare books and work by two artists in particular – Henri de Toulouse Lautrec(1864- 1901) and Friedel Dzubas (1915-1994).

The former is of course a very likeable and widely admired artist, but the latter was – and is – truly far out -- challenging indeed. Lipman seems to have been largely self-educated – he quit college after only two years to help out in his father's business – but he somehow acquired this highly sophisticated taste for Dzubas. Over the years, he bought more and more paintings by him -- never selling or trading them in – to a total of 43 in all.

The reason there were only seven Dzubases on view when I visited Feely's temporary exhibition space in Chelsea on May 1 is that last summer Feely set up another  temporary exhibition space in the Hamptons, and displayed work from the Lipman collection there. As nearly as I can tell, sales in the Hamptons were excellent, as there are now less than a dozen of the original 43 left.

THE SHOW IN CHELSEA

Nevertheless, the show in Chelsea vaut le voyage, as the Guide Michelin would have it. On the basis of these seven paintings, I'd say that Lipman had an excellent eye and managed to pick out a wide range of top-ranking Dzubas paintings.  Almost all are from the from the artist's most mature and rewarding period, which began in the early 1970s.

The earliest canvas that I saw was "Salerne" (1971), a long, narrow horizontal painted just when – or just before -- the artist was achieving this mature style.  Provocatively, it combines a handful of vertical sweeps of bold color with large areas of bare or faintly tinted canvas.

The latest work in the group is "Madame X"(1983), a tall narrow vertical with quantities of paint on it – red, yellow  and brown.

In between are paintings well and evenly covered with paint, not too much and not too little.  Facing the entry is the biggest and most classically like Dzubas one.  It is called "Midnight" (1982) and is nobly proportioned – five feet high and fifteen feet wide.  Though it is filled with broad areas of many different colors  -- warmer ones as well as cooler ones—it never looks cluttered.  Everything just –works.

To the right and left of "Midnight" are two smaller, square and almost equally classic Dzubases.  Both emphasized vertical cascades of paint. On the left is "Early Race" (1981), with a paler but still incisive palette, including mint, yellow, reddish brown and iron grey. On the right is "Night Ferry" (1975), heavily into deeper blues and greens.

All three of the three paintings on this wall together are excellent and very characteristic, but my heart went out to the painting hung catty-corner to them and facing "Salerne," if only because it is so emphatically atypical and uncharacteristic.  This is "Nightroot" (1973), completed right on the cusp between the artist's late artistic adolescence and the arrival of full artistic maturity

A broad horizontal. "Nightroot" measures about 5 feet high by 11 feet wide and conjures up the beginning of Dzubas's mature habit of "feathering" areas of color into other areas of color by a lighter and cloudlike transitional space. What makes "Nightroot" so unusual is that it has really only five very broad and heavy horizontal sweeps of color.

Two very dark ones on the left reach three-fifths of the way across the canvas, where in the midst of a small off-white explosion, they meet up with three lighter ones coming from the right.  But the dark areas clearly have it all over the brighter ones, and for the lighter ones to emerge, the off-white explosion is necessary – just as the rising of the sun is vitally necessary to turn a long dark night into day.

My own recollections might prompt Piri Halasz to add more to her excellent words about the stunning " Nightroot ".
The Viennese abstract painter Gottfried Mairerwöger (1951-2003), took me to the St. Florians Monastery Church in Wien (where Anton Bruckner had been organist), to look at the frescos by Franz Anton Maulbertsch the great Rococco ceiling and cupola painter . As Dzubas had taken Maierwöger to look up high to these frescos by lying on the pews , he pointed out how Maulbertsch used a method to blend figures,forms,passages into each other. This is achieved with the fresco method where wet paint is applied to wet plaster. Dzubas adapted this method using a water and turpentine based acrylic paint called Magna onto wet canvas this blending which Piri calls "feathering". It is surely original in abstract art and more needs to be known about his methods and technique.

David has said it all so beautifully that I don't see how I could possibly add more! This is only a review after all, not a whole book. But I am sure that there is a lot more about Dzubas's tools and materials in the excellent monograph on Dzubas by Patricia L. Lew.y, published two years ago and reviewed by me at artcritical.com