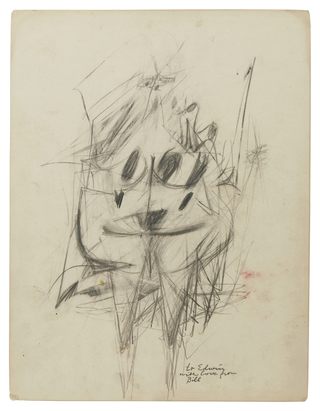 I don't know when I saw a neat, lovingly precise pencil drawing of Elaine de Kooning created ca. 1940-41 by Willem de Kooning.  Was it 1968, when one such drawing was reproduced in the catalogue to MoMA's de Kooning retrospective of that year? Or has it – or another like it -- been displayed more recently?

Anyway, I hoped to re-view it, and/or see other drawings of women like it, when I visited "Willem de Kooning Drawings" at Matthew Marks (through June 26).  I didn't see it, or anything like it, but two later drawings of women led me to award de Kooning a title that he might not have liked, but that his postmodernist fans should appreciate: "Step-Dad of Pop"

To be sure, the 36 drawings tastefully installed at Matthew Marks include a half-dozen from the late 1930s and early 1940s.

They show the careful attention to detail that the Dutch-born artist (1904-1997) would have learned at the Academy of Fine Arts and Techniques in Rotterdam, where he attended night school classes for years while working as an apprentice at a design and decoration firm from the age of 12 onwards.

He migrated to the United States in 1926, settled in New York and soon fell into artistic company – making friends with Arshile Gorky, John Graham & Stuart Davis.

He also signed up for the WPA, making murals.  The earliest drawing in this show is a 1937 sketch for a mural that decorated the Hall of Pharmacy at the 1939 World's Fair.

These early drawings are mostly fragments, and the more fully-worked-up one of a woman has nothing in common with de Kooning's drawing of Elaine or with his later and more famous "abstract expressionist" renditions of women.

Rather it shows the nude body of Juliet Browner, a woman who preceded Elaine in Bill's affections.   She is awkwardly sprawled on the floor face down, but the drawing is dated ca. 1938 and in style is just as careful and literal as is anything else from this period.

I much preferred the "Portrait of a Man (Harold Rosenberg)," also c. 1938.  This is only drawn very lightly but it is a fully worked-up portrait, with Rosenberg completely dressed, a hat upon his head and what looks like a scarf around his neck.

There is a lot of humor in this image—the poet (and future art critic) has heavily outlined eyes and looks rather like a clown.  And this humor -- I would argue -- is a central element in much of de Kooning's later work as well.

At this point I started looking for drawings that corresponded in style to my recollections of the portrait of Elaine in that 1968 catalogue.   The press release seemed to promise that at least one such image was included in the show.

"The traditional skills he learned at the art academy in Rotterdam are evident in a sheet of precisely drawn portraits of Elaine de Kooning from the early1940s," it said.

When I couldn't find this sheet on the wall, I asked the gallery attendant about it. He explained that it appears in the virtual version of the show, but not in the gallery where I could eyeball it for myself.

And I'm sorry but I simply do not comment on the esthetic quality of works I can only see in reproduction.

Far too often, the camera lies. I did, though, look at the onscreen image, and can report this much: an irregularly-shaped piece of paper shows five women's heads, all with different hairdos.

Moreover, I was very taken with the accompanying text block, which quotes a book by Edvard Lieber, one of Elaine's former assistants, telling how this sheet came into being.

It seems that Bill got an assignment from Harper's Bazaar to make pencil drawings of women's faces with different hairstyles.  Elaine bought cheap hairpieces, integrated them into her own hair, and posed, but the editor who had assigned the job was disappointed with the results.

He paid Bill, but also said that it would take at least five years before he was good enough to make a living as a commercial artist. This persuaded de Kooning to focus on the fine arts instead.

I found this anecdote hilarious – since the usual situation is that an artist becomes a commercial artist because he can't make it as a fine artist – but it also sent me back to my notes on the checklist which I had retained from my gallery visit.

Then we were with de Kooning in his most famous incarnation, with two drawings dated c. 1950 and portraying women.  "Two Women," as the title suggests, presents us with two women; "Woman" has a single figure.

Hold on! I said to myself.  Wasn't this the period when de Kooning was at his most abstract, at least in his public appearances?

First, in the spring of 1948, had he not exhibited his perfectly abstract "black" paintings in his first solo exhibition, at Egan?  None other than Clement Greenberg had raved over it – as did Thomas Hess, high-ranking editor at Art News.

Then, over the summer of 1948, Bill (with Elaine) went down to Black Mountain College, where Bill began work on "Asheville," the first of his monumental and powerfully abstract compositions.

This was the de Kooning whom everybody thought of as the passionate advocate of abstraction (and whom I admire for his wealth of multireferential imagery).  But in the 1940s he was already painting comic pictures of women, and he would continue to do so, off and on, for decades to come.

These were introduced to the general public in April 1953, in a show at Sidney Janis.  It followed by four months Rosenberg's article in Art News on "The American Action Painters," an apologia for abstract painting as "an arena in which to act" that has more often been applied to Pollock but more likely was intended to boost de Kooning.

For me, the abstract paintings between say 1946 and 1950 are the only de Koonings that count as a positive asset to art history, but for all the good people who were baffled by abstraction, de Kooning's semi-abstract monster goddesses were the answer to a prayer.

They had so wanted to be able to say that they "got" abstract expressionism --- because after all it was the newest "big thing."  Now they felt they could say that they did get ab-ex, citing de Kooning's "Women"" as their example of it.

The show was a tremendous hit, with MoMA buying "Woman I" out of it for their permanent collection.

All over the country, so I understand, art historical surveys were given course titles like "Cave Painting to de Kooning."

And I would imagine that de Kooning's women encouraged younger artists like Robert Rauschenberg to similarly try and act "in the gap" between art and life, just as they may have encouraged Andy Warhol  and Roy Lichtenstein to explore comic strips as a form of high-art expression.

Especially I would suggest this because of those big cartoony eyes that so many of de Kooning's women have, and their big cartoony grins.

Everybody knows  that Marcel Duchamp is the biological daddy of pop art, but it's both because of de Kooning's push back against abstraction and because of his push toward pop-cultural cartoony humor that I herewith nominate him as the step-daddy of pop art.