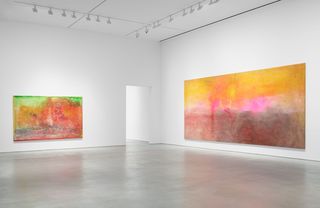 Herewith my own review of Bowling's New York show -- which I seem to have liked less than Evison liked the London show --at least until I started to take it picture by picture.

I started out feeling that this  was not my favorite Bowling show.  The man's a great painter, but his work in this case has been "edited" in a way that makes him appear less rather than more great. At any rate, that's my opinion, though admittedly it's only an opinion and I'm sure I'm in the minority (as usual).

I know there's a lot of interest in "diversity" at the moment.  A number of Bowling's paintings from the '60s and early '70s incorporate maps of South America, with or without maps of Africa and/or Australia.  These maps refer to the slave trade and remind viewers that the artist's ancestors were slaves transported from Africa to his native Guyana.

This should make such paintings very much sought after right now, and to accommodate this expected demand, every map painting in the artist's storage areas seems to have been recruited, regardless of its esthetic quality.

This is not to say that all the map paintings are necessarily bad.  On the contrary, I thought the large purplish blue-upon-blue one entitled "Polish Rebecca" (1971) highly effective.  The gallery offers two spaces for this display – a large opening space and then an even larger inside space. "Polish Rebecca," which measures roughly 9 x 12 feet, queens it over the huge inside space, effortlessly commanding attention from on high.

And there's another pair of paintings, hung just to the right of it, that I also enjoyed seeing – as they refer to Bowling's art-historical British heritage. These two, both completed in 1984 and both measuring roughly 8 x 10 feet are entitled "Enter the Dragon" and "Armageddon."

The special thing about them is that they are pendants, just like 18th and 19th century paired portraits that depicted husbands and wives facing each other from separate frames.  These two Bowlings, uniformly golden-red in coloration, are made with acrylic, acrylic gel and polyurethane foam on canvas with marouflage.

"Marouflage" in this context suggests that the paintings are mounted on canvas which in turn is glued to a harder, stronger surface, but what grabbed me was the fact that the several long, narrow strips of polyurethane foam on each canvas are arranged so that the (abstract) design on the right-hand one faces the left-hand one, and vice-versa.  Very neatly done!

Another art-historical reference that tickled me – even if it does imply figuration—is the painting in the entry space called "Pondlife (After Millais)" (2007).  This is another one with a lot of ingredients.  The checklist says it has acrylic, acrylic gel, fabric and found objects on canvas with marouflage.

In this case the found objects (whose identity I couldn't figure out) seemed up to be all piled at the bottom of a tall, narrow canvas measuring roughly 8 feet high by 4 feet wide, and with many long, narrow, vertical shapes and forms in the  upper reaches of the image.

For reasons I don't fully understand (beyond the title) I was irresistibly reminded of the drowning Ophelia in the 1851-2 painting entitled "Ophelia" by the Pre-Raphaelite painter, John Everett Millais – though when I refreshed my  memory of that painting online, I saw that it's a horizontal, not a vertical.

Okay, so go figure—despite the darkness of its palette, I found "Pondlife" highly diverting.

Finally, to go to my checklist in order to see what I considered the best paintings in the show when I was actually there, on the spot, recording my gut reactions.  One painting that I gave a single star to was "Pondlife."

Another single star went to "Rising," one of two smallish vertical abstracts hung next to each other in the huge, inside space of the gallery and characterized by the pouring technique that Bowling was employing to such good effect in the late 70s and early 80s."Rising" is dated 1978.

I awarded two stars to "Rosebush," which hangs right next to "Rising" and is a better demonstration of Bowling's pouring technique. It is dated 1974.  Although it is a perfectly adequate painting, I believe there were better examples of this kind of art in the Tate Britain show (one of which I used to illustrate Evison's review of that show).

Greenberg was fond of saying that you don't get to choose which art you like – that instead the art chooses you. And in this show the painting which chose me as the best one in it was "Texas Louise"(1971).   True, it's a "map painting," with the images of North & South America in the center, but they're small and easily lost in the seas of red, yellow and purplish brown that flood over this huge, 9' x 22' canvas.