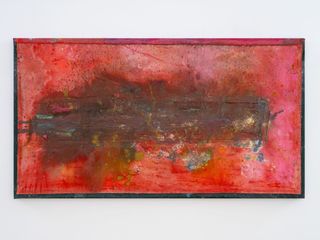 The last time this column looked at the art of Frank Bowling, this prodigious painter, was on June 29, 2019, when David Evison, the British sculptor, reviewed his memorable retrospective at Tate/Britain.  Since that time, Queen Elizabeth has knighted him, and as "Sir Frank" he has graduated from the relative obscurity of the Hales gallery to the big leagues of Hauser & Wirth.

I only review shows that I can see, so I must confine my remarks to the New York show. However, I am delighted to be able to welcome to this website a review of Bowling's London show by Evison..

Herewith is the report from Evison on the London show of Bowling:

"Hauser & Wirth is situated on the ground floor of a new Savile Row building and has direct access from the street.  On entering, one is confronted by a 9 ft. x 6 ft. painting and the desk is situated to the right of it.  Hung high above it is a medium sized painting which is a masterpiece.  It is called, "Flogging the Dead Donkey."

"Entering the 3000 sq. ft. gallery one sees 8 paintings 5 of which are bigger than the entrance painting. It is an impressive hang and one can say that Sir Frank has truly arrived.

"He met Clement Greenberg in 1971 which led to change in his art. Then a series of pour paintings were made in London, medium-sized verticals deriving from Morris Louis but using syrupy paint of very original colour, showing what a talent he possessed.

"In the '70's he got to see Jules Olitski exhibitions in London and New York, also Larry Poons and these artists influenced his work.  It is such paintings that dominate the exhibition.

"The one painting that shows direct Olitski influence has a neutral beige field with acrylic gel body, and colour strips framing the field. But he has not chosen to confront Olitski on his terms, meaning the subtle differences in the sprayed field made decisive by linear drawing around the edges.

"It is Poons that he prefers to take on, particularly those paintings of the '80's that have a built up field of foam, cardboard and other objects,  before paint is allowed to run down over the surface covering the forms.

"Sir Frank's use of materials is much more limited which is an advantage. He always complained about the cost of taking on Poons.

"The two best paintings only use a few 3-inch wide strips of foam making for simple curves.  Then comes the gel followed by poured paint, dripped and dabbed on but not brushed. The foam strips concentrate the eye towards the centre and then to the edges and altogether to his exceptional colour.

"The exhibition is spoilt for me by a preponderance of paintings that have confusing passages built up with foam covered by sumptuous antique colour. For a 19 year old immigrant from British colonial Guyana he succumbs to the English grand manner as though born to it."