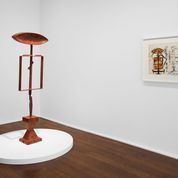 "David Smith: Follow My Path" is the name of the latest look at that master sculptor, currently at the East 69th Street branch of Hauser & Wirth (through July 31). Taking its name from a lecture that Smith (1906-1965) gave at the Detroit Institute of Arts in 1962, it turns out to be a learning experience for the viewer, much as it must have been for the artist himself.

The general idea, repeated over the three narrow  stories of this aristocratic town house, is to offer five groups of mostly very similar sculptures from five different moments in the artist 's career, accompanied by related drawings, paintings  and/or photographs. While the individual displays work well together, the floors on which they are arranged make it difficult to follow Smith's development in a chronological manner

To get an idea of Smith's chronology, one ought to go first to the second floor galleries, where are displayed two of the earliest works on view, "Blue Construction" (1938) and "Vertical Structure" (1939). These are neat, spiky little abstract figurines which – to judge from the surrounding drawings and other works on paper – were intended to capture the tension and grace of dancing ballerinas.

Then, if one really wants to stay with this chronological progression, one should ignore the rest of the work on this floor – since it relates to the early 1950s –  and go immediately to the top level of this display, on the third floor.  There works from the 1940s which seem to have appealed to two different collectors are on view.

In the front gallery are two small sculptures relating to a game that Smith appears to have liked: "Billiard Player Construction" (1937) and "The Billiard Player" (1945). Both are busy and full of detail, the latter in particular.

In fact, "The Billiard Player" is so literal, with the face and hands so clearly delineated, that I found myself reminded of cubism or constructivist sculpture.  Still, it appears to have appealed to Roy Neuberger, an early collector of American modernism who with his wife gave it to the Whitney.

In the back gallery are two somewhat larger and more full-bodied bronzes.   One, entitled "Euterpe and Terpsichore" (1946) is made of silicon bronze and brass – hence retaining its original golden color.  The other, "Terpsichore & Euterpe" (1947) is made of patinated bronze – hence green.

Both suggest – in highly abstracted form – one figure dancing, the other playing a piano – though without the green one, which is more vaguely representational, and without three accompanying paintings, which are quite representational, it would be difficult to perceive any imagery in the gold-colored one.

Euterpe was the ancient Greek muse of music; Terpsichore was the muse of dance, and both testify to the artist's continuing fascination with creating figures of women in highly abstracted forms.  The green one is now owned by the Harvard Art Museums  having been donated by Lois Orswell, who had amassed a fine collection of Smiths.

Moving back down to the second floor of Hauser & Wirth, we find a marvelous steel sculpture from1950 entitled "17 h's."  A rectangular "drawing-in-space" with rows of little letters, it belongs to the same family of sculptures as MoMA's "Twenty-Four Greek Y's" and "The Letter," at the Munson-Williams-Proctor Institute in upstate New York.

Both of these two are also dated 1950 and all three are absolute vintage Smith. "17 h's" is owned by the Whitney, but they are apt to be so determined to be up-to-the-minute that they may not have it on view when you next visit there. After all, it was created by a straight white male, a category of artist that is out of favor at the moment.

On the ground floor is the most recent – and most appealing – part of the entire display. I was particularly taken by the four tall and slender standing figures, ranged in three receding galleries.

First on view is "The Hero"(1951-52), a treasure from the  Brooklyn Museum, accompanied by a handsome little preparatory drawing for it. If you look carefully, you will see two little steel triangles affixed to the chest area of its steel backbone, and suggesting that despite its title, it is intended to refer (however obliquely) to a female of the human species

All but a couple of the sculptures in this show are painted or finished  in some other way, but the finish in most cases is matte and subdued in tone, hence unobtrusive.  With "Ninety Father" the paint on the back of it is mottled. This I found distracting—nor can I recall what the paint job on "Ninety Son" was like

Hidden at the back of the ground-floor display is a separate but airy little space of which the centerpiece is "Lunar Arcs on One Leg" (1956-1962).

This is a 9-foot-tall but very slender and graceful piece, with most of its upward-reaching body composed of two exceptionally narrow curving strips of steel – balanced (as per the title) on one leg,  but supporting two much smaller but broader chunks of steel at  its apex. The entire sculpture is painted a bright yellow, which lends a manic fillip to the proceedings.

"The Hero," the "17 h's," and the "Lunar Arcs on One Leg" were my three favorite sculptures in this show, but seeing them in the context of Smith's earlier experiments from the '30s and '40s helped me to understand and appreciate how long it took him to arrive at his mature solutions, and how many other avenues he felt compelled to explore in order to wind up at his eventual destination.

The two-dimensional works surrounding the earlier work in particular helped me to see where the sculptor was starting from, though – with a few exceptions,including the photoographs and the drawing of "The Hero" -- I'm not sure they would hold up by themselves.