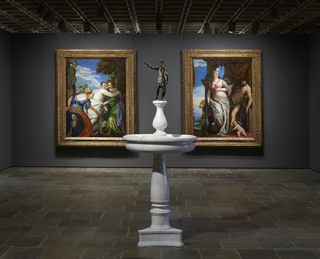 If you ask me, the best show in New York is "The Frick Reframed." This is the name that The Frick Collection has given to the rehanging of its matchless collection of Old Masters in the Marcel Breuer building originally built for the Whitney Museum.  This collection will be there for two years while the Frick's own building undergoes extensive renovations.  But don't wait for two years to give yourselves a treat.

The new environs is also called "Frick Madison," and Frick Madison is only open four days a week, Thursday through Sunday.   You have to reserve a spot in advance, and all that good stuff, but once you get there, you will find that all these paintings you have always loved take on a whole new look.

For one thing, connoisseurship is Out and art history is In. In the old building, everything was higgledy-piggledy: paintings from different periods & countries (with few exceptions) were all hung together.  In the new installation, we have separate galleries for everything.

On the 2nd floor, we have Northern European, with different galleries for 1) Holbein and Early Netherlanders; 2) Dutch (including Hobbema & Hals; 3) Rembrandt; 4) Van Dyck; and 5) Vermeer.

On the 3rd floor, we have separate galleries for 1) Early Italian, from Duccio to Piero; 2) High Italian (from Bellini to the 16th Century Venetians and beyond), and 3) Spanish (from Velázquez to Goya).

Additional galleries (that I didn't visit) house bronzes, porcelains and Mughal carpets.  A small space is also devoted to the French Renaissance enamels that used to share space with Piero and Duccio in the old building, and wondrous clocks donated by the estate of "Kelly" Edey.

The fourth floor is kind of a catch-all for more recent art from Great Britain and France.

Separate galleries are allotted to French 18th century painting, French decorative arts, French painting from the early19th century, and French impressionism, along with two galleries for Fragonard ("The Pursuit of Love"), a long gallery for English portraiture, a smaller space for English landscape (Turner & Constable), and a still smaller space devoted to Whistler.

Putting all these marvelous paintings out on display in a fresh setting  -- and with different companions -- makes one look at them a  different way. This is especially true when it's a museum setting – which the Breuer building certainly is (especially as brilliantly adapted for this purpose).

The best work looks even better – but the less good work also reveals its weaknesses.

The 4th floor is the weakest of the three levels, despite the brilliance of the Fragonards, the Turner and especially the Constable (the museum owns other fine paintings by both of these landscape artists, too – I especially miss the Constable portraying Salisbury Cathedral).

As for that pitiful little selection of Impressionists –it's clear that in the days of Henry Clay Frick, impressionism was still too "modern."

The Rembrandt gallery on the 2nd floor constitutes a particularly beautiful display.  Even though it holds only three paintings, every one's a winner: the self-portrait, the haunting "Polish Rider," and the portrait of Nicolaes Ruts.

And, in the gallery with the Early Netherlanders, two splendid portraits by Holbein have been tellingly juxtaposed, to offer a jolly little commentary on the Reformation.

One portrait shows Sir Thomas More, who went to his death rather than accept Henry VIII"s decision to leave the Catholic Church. The other portrait shows Thomas Cromwell, who according to the novels by Hillary Mantel, was Henry VIII's chief tool in effecting that break with Catholicism.

More looks like a handsome saint, while Cromwell looks singularly ugly and sinister. Can anybody have any question as to Holbein's own religious allegiance?

All that said, it's the third floor -- with the Spanish and the Italian artists --- that really bowled me over.  And especially the big gallery right in the center of the floor, with the Bellini over on the right, next to one the museum's trapezoidal windows, and the 18th century Venetians over to the left.

Closer still are two memorable portraits by Titian, in the middle of the space, a little baptismal font with a statuette of St. John the Baptist, and behind it – commanding the view – those two large allegorical paintings by Veronese, with their luscious flesh, gilded tools and armor, and opulent fabrics.

I really love those paintings, which are titled "The Choice Between Virtue and Vice" and "Wisdom and Strength" (both c.1565). They are just so gorgeous!

I only wish the Frick had indulged in a little more extensive on-the-spot labeling. This would have saved me the necessity of having to thumb through the little book that was handed to me at the media preview, and spared everybody else the necessity of consulting that tedious little "ap" which was being handed out to all the little techies I was surrounded by.

Somehow to me a terse, well-phrased little label on a wall beside the artwork remains the best way to convey essential information without getting between that artwork and the viewer.