"IN FULL BLOOM" AT LICHTUNDFIRE 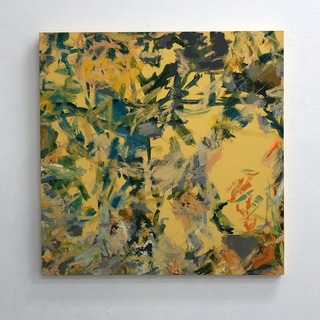 The second group  show I saw and enjoyed on the Lower East Side was "In Full Bloom" at Lichtundfire on Rivington Street (through August 20).  This is an exhibition that as its press release says, "addresses the depiction of floral motifs, plant life, vegetation and the rich landscape of a season indicative of growth and bloom."

I've written up this gallery's shows twice before.  Most recently was in August 2020, when it was one of the first galleries to re-open as the Covid-19 pandemic abated in New York; it featured paintings (mostly abstract) done at the height of the pandemic.

More relevant to the present show was the one I wrote about in February 2020. That  one was titled "Remember When It Winter Was;" its emphasis was on abstracts done in blacks, grays, whites and other elements suggestive of snow, ice and trees denuded of leaves.

As might be expected, "In Full Bloom" is more colorful than "Remember When It Winter Was," with not only greens but many other colors as well.  Less expectable is the greater emphasis on representation as opposed to abstraction.

Typical—and in its way admirable—is Robert Solomon's "White Flower 2" (2020).  It depicts one huge bloom with pink petals radiating out of a blackish-brown center---all on a black field. Quite enterprising.

Martin Weinstein has developed an ingenious way of making a slightly three-dimensional image depicting flowers and background elements by applying acrylic to multiple layers of plastic sheets.  Of four works utilizing this technique in the show,  the largest is also the most successful: "Irises and River, Evening Under Afternoon"(2019).

Among other more successful works in this show are the cloudlike "Lavender Shadows" (2021), by Vian Borchert,  an acrylic on canvas; also "Echo and Narcissus" (2012),an oil on linen by Mark Kurdziel of two little girls around a pond with flowers blooming,  executed in a stylized semi-primitive styie.

Other participants include Bobbie Moline-Kramer;   Jane Fire; and Robert Jessel.

Nevertheless, for me the standout is "Spring Forward" (2014), an abstract oil stick and acrylic on a 2-foot-square wood panel by Philip Gerstein.  Composed of spiky yellows and light greens, with touches of orange and blue, it has a marvelously leafy texture without plunging into literal depiction.

My critics may say I only favor this painting because it's abstract,  but to me all the parts  in "Spring Forward"  hang together better than the parts of any of the other paintings in this show. It is this integration that makes the painting so pleasurable.