"THE SECRET GARDEN" AT EQUITY 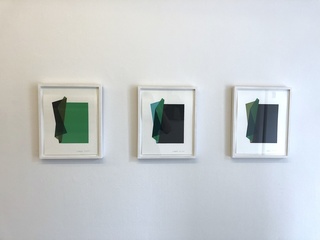 One of two group shows that I saw and enjoyed on the Lower East Side was "The Secret Garden: Redux of a Year's Exhibitions at 1GAP Gallery, Brooklyn," at the Equity Gallery on Broome Street (closed August 14). This show was guest-curated by  David Cohen, editor of artcritical.com. On display were modestly-scaled samples of work by ten artists whom Cohen, in another guest-curatorial stint, had previously honored with far greater exposure over the past year in three consecutive exhibitions at the spacious 1GAP Gallery in One Grand Army Plaza, Brooklyn.

As I didn't get to the Brooklyn shows, I was glad of the opportunity afforded to me by "The Secret Garden." However, I confess that the names of only two of the ten artists listed in the show's press release were familiar to me before I got there: those of Kim Uchiyama and Willard Boepple.

And to be frank, they were also the two artists whose work in this show impressed me the most – even though almost all the work in the entire show was abstract or semi-abstract, and I'm supposed to be such a fan of abstraction.

Even though I would agree that the work on the whole was definitely on a high professional level – and finally, even though I know it's really not fair to evaluate the quality of anybody's work from such a very small sampling of it.

I will say that, as shows go, this one was very nicely put together.  The front gallery in particular offered a most harmonious appearance, with nine smaller works by five artists—Boepple, Uchiyama, Erin O'Brien, David Rhodes, and Jason Stopa.

The second, slightly larger space had mostly larger works by Fran Shalom, Jennifer Riley, Drew Lowenstein and Fran O'Neill.   The back office had six more small works on display, but I am afraid that I have a policy of not commenting on works that aren't out in the public display area.

(I write for art lovers who might want to see shows even though they aren't in the market for buying anything, so I reason that I really can't include discussions of work that some dealer might have to haul out of a back room.)

In that second space, the work I liked best was "Coming Down" (2020), a 30-inch-square abstract oil on canvas by Fran O'Neill, with lovely flowing lines of blues, blacks and off-whites.

In the front, entry gallery, I thought "Orphan" (2017) by Erin O'Brien, was not without merit.   An acrylic on linen measuring 20 x 16 inches, it was dominated by 2 browns, black, blue and a small area of green, and vaguely suggests natural forms.

As I've said, one of the two best artists in this show, in my opinion, was Uchiyama.  She was represented in this front gallery by "Sounian" (1921), an oil on linen measuring 34 x 30 inches. It was composed of broad horizontal bands of paint (blue, green, brown and ocher) alternating with narrow strips of bare canvas and thus had the requisite amount of energy  to lift it from the dread category of minimalism.

Boepple is a sculptor who makes screenprints as a divertissement.. What a blessing it is that he does! In this show, we had a suite of three similar monoprints titled "E," "H," and "J" from a series called "Lefts" (2014). The image in all three prints was of a central vertical rectangle with a semi-transparent element to the left pulled back, like a curtain.