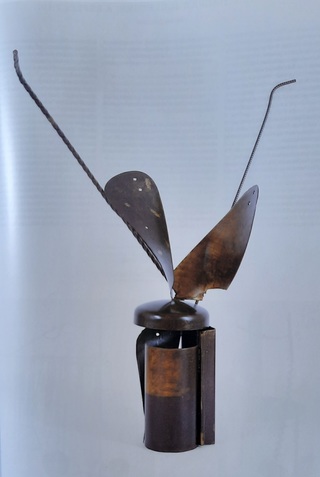 This column is indeed fortunate in having an overseas correspondent, David Evison, to review three shows by Helen Frankenthaler currently on view in London. Particularly this is fortunate because Evison is a sculptor, and the biggest surprise of all three shows is a sculpture by an artist far better known as a painter. Herewith Evison's report:

"The Grosvenor Hill branch of the Gagosian Gallery in London's Mayfair district is large, airy and light and there is a smaller Gagosian branch around the corner on Davies Street; both are next to Berkeley Square.

"In the Davies Street branch is a wonderful surprise: a steel sculpture made in 1972.  Called "Heart of London Map," it is 220 cm high (more than 7 feet).  And it is the star of a show called "Helen Frankenthaler: A Sculpture and a Selection of Works on Paper" (through August 27).

"My initial response was of disappointment. Two large paintings using diluted oil paint on sized canvas looked decidedly European, overworked with filled out passages and too many colors.

"Not that European is bad, but she only hits the jackpot in 1952, with "Mountains and Sea," which was painted on an unsized canvas and had such an impact on Morris Louis and Kenneth Noland after they saw it in her New York studio.

"Four large oils on unsized canvas from the '50s and the very early '60s come next in this show, employing the artist's repertoire of poured paint drawing deriving from Pollock's black enamels on raw canvas.  They are not up to the level of her best works from that time, many and maybe most of which are now in museums or superior private collections.

"Some of the paintings at Gagosian look more like huge drawings for sculptures: the artist's talent as a colorist is subjugated to creating a strong linear image, as in "Square Figure"(1961).

"However, entering the adjoining space all is forgiven. The earliest paintings here are from 1963 and Frankenthaler's color here is unusual pastel shades.. Then come four hotties where she is master of the medium -- even challenging Olitski with "Red Travels" (1971), where the dramatic difference in scale of a large painted field contrasts with much smaller elements -- and is used in a more delicate manner by Frankenthaler.

"The largest of the paintings on view, at nearly 9 by 10 feet, is "Sphinx"(1976).  It was granted a color reproduction in Jonathan Jones's rave review in The Guardian (Jones is a Johnny-come-lately to abstract modernism who helped the Y B A's become millionaires)

"Sphinx" is superb, but only from very close up:  it lacks what Matisse called 'perspective', meaning to be good from a distance as well. The important 1-foot streak of yellow needs some thick paint to give it emphasis, and dare I say it, that was not allowed in her rule book.

"A small acrylic on paper in the Davies Street gallery, "New York X" (1972-74), is almost a sketch for "Sphinx" and much more successful.

"One thing that struck me from the whole exhibition was how indebted Frankenthaler was to Hans Hofmann.

"Not to confuse her with Lee Krasner who was a Hofmann student, Frankenthaler has studied Hofmann's late abstracts with his  thinly-brushed first coats covered by slabs of thick oil paint as well as his 'nature paintings ' describing the weather.

"To return to Frankenthaler's sculpture: What a pity she only made ten sculptures with Charlie Hendry who had been Caro's assistant and had the necessary patience and temperament to make a good team!

"Heart of London Map" is special.  The artist was able to use some discarded plough-shares and other stock that had belonged to David Smith and that Caro bought after Smith's untimely death and had shipped back to London.

"What I do not want to call ' the base' is made of 3 steel forms. Then a Smith tank end sits jauntily on it with two plough-shares welded on its top. Then comes the master stroke::two drawn lines in different thicknesses of steel rod.  The whole is anchored in space by the delicate bending of the lines at the top. Straight out of a painting like "Red Travels "

"One could be mistaken for thinking Frankenthaler had always been a sculptor as she is speaking with her own voice."

"This artist has also been granted one large space at Tate Modern, London to exhibit five large paintings. Four of these paintings are on loan from the Helen Frankenthaler Foundation; a fifth, "Vessel" (1961) was presented to the Tate by the Foundation in 2019.

"Located within a floor of the museum which is free, one must first run the gauntlet of "In the Studio" -- through large galleries stacked with work from the permanent collection, chosen by junior curators allowed to rifle through the holdings in storage.

"The Frankenthalers have been chosen by expert eyes and they let a ray of light into the gloom.

"Most surprising is "The Sightseers," a picture painted in 1951 using pastel shades and black linear marks. The slight drawing of shapes and delineations is seen clearly through the thinly brushed color, and finally comes strong linear drawing in brushed-on black. Only Pollock got to this level in the allover style, and like Pollock she is talented, and how!"