A DON'T-MISS TITIAN SHOW IN BEANTOWN 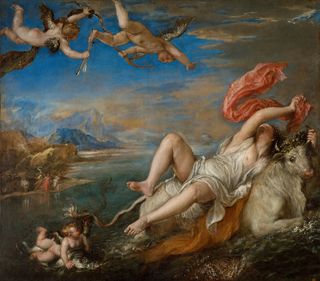 The Isabella Stewart Gardner Museum in Boston is staging what sounds like one of the all-time great shows, at any rate for those of us who relate strongly to colore (as opposed to disegno), and who therefore revere Tiziano Vecellio (c. 1488-1576) even over Vasari's favorite, Michelangelo. To give Tiziano his English name, the show is "Titian:  Women, Myth & Power," a cycle of six monumental paintings on mythological themes painted mostly in the 1550s by this quintessentially Venetian master (through January 2, 2022).

I wish that Helen Frankenthaler were alive to see this show: in a postcard to me, she once described herself as a "Titianophile," or perhaps (she added) a "Titianomane."  But even I may not get up to Boston before the very end of the show's run--if then.

So, as I wanted to alert all my readers to it earlier, I offer a link at the end of this entry to a singularly perceptive review of it by Franklin Einspruch, who is based in Boston and who, being an artist as well as a writer is especially well-qualified to evaluate its pictorial virtues.

Foremost in terms of the present historical context is how I first became aware of this show: through an article by Holland Cotter in the New York Times for August 13.

While seemingly thorough on the historical context in which Titian painted these pictures, and reasonably able to treat the paintings on view as art, he can't resist moralizing about them from the vantage point of a "progressive" political thinker in 2021.

"… the whole cycle," he writes, "With its repeated images of gender-based power plays and exposed female flesh, invites #MeToo evaluation, and raises doubts about whether any art, however 'great,'  can be considered exempt from moral scrutiny."

This is fighting language, and Einspruch gets carried away by it—but so did I. And, if he will forgive me, I will take a few additional minutes of the reader's time to point out that art has been subjected to "moral scrutiny" for a lot longer than since #MeToo.

Greek gods and goddesses were considered immoral already in the Renaissance.  After all, humanism was the new vogue in Italy: the prevailing religion was Christianity.

In Florence, anti-humanist moralizing peaked in the late Quattrocento and early Cinquecento.  When Titian was a child, the fiery monk Savonarola was preaching against the "profane" art of the Renaissance.  To him, the only proper art was Biblical.

Even Botticelli, creator of "The Birth of Venus," was so affected by the artistic climate that Savonarola had created in Florence that he gave up painting altogether for several years.

Moving along to the 16th century, Reformation Lutherans and/or Calvinists broke up the glorious imagery of stained glass windows in churches and substituted plain glass panes instead. Also dispensed with were "graven images" in such churches.

Between 1642 and 1660, when Oliver Cromwell and his Puritans were running Great Britain, all the theaters there were closed. Christmas carols (along with celebrating Christmas at all) were banned.

Even before Queen Victoria, 19th century Brits were shocked, shocked, by anything improper.  Thomas Bowdler, with his sanitized 1807 edition of Shakespeare, gave his name to the whole practice of editing out the "objectionable."

Cotter's moralizing may be seen as differing from such previous attempts to sanitize art in that he claims to be condemning art from a "progressive" viewpoint, as opposed to a "conservative" one.  But even such "progressive" condemnation is not that new.

"Relevance" has been a postmodernist shibboleth ever since the reaction back against abstract expressionism and the drive into the figurative (if not always representational) art of pop leaped to the fore of the artistic dialogue in the fall of 1962.

The postmodernist attempt to downgrade truly great contemporary art and elevate the second-rate has been going on since pretty much the same time.

And what began as an assault on contemporaries and near-contemporaries has long since broadened into a historical critique as well.

I regard present-day attempts to substitute a political standard for an esthetic one as merely the latest attempt to justify and perpetuate the second-rate postmodernist art which fills so many galleries and museums today.

Still, "diversity" as a political slogan has uses as well as abuses. A rising tide lifts all boats, and the diversity vogue has enabled a number of truly deserving male artists of color to receive recognition in recent years that they never had before.

To mention just four who could be benefitting from #MeToo but aren't, I'd cite (in alphabetical order) Randy Bloom, Susan Roth, Francine Tint, and Ann Walsh.

As for using #MeToo standards to judge Titian, I'd say that art, especially great art, is neither immoral nor moral.  It is fundamentally amoral.

Esthetics and morality are like apples and pears -- two separate frames of reference – anyway, as far as conventional morality is concerned, with its need to judge an artist's subject matter by the politics and behavior of a passing moment in time.

Still -- however amoral Shakespeare may be, he's outlived Oliver Cromwell and Bowdler, even as "The Birth of Venus" has survived Savonarola. So there's reason to hope that Titian will still be giving pleasure (to those with eyes to see him) long after Holland Cotter, Franklin Einspruch and I myself are dust.

That said, I invite you to read Einspruch's fine first-person report on the Titian show in Boston (as originally published in The Arts Fuse): Here's the link: https://artsfuse.org/235279/visual-arts-review-titian-women-myth-power-the-furious-force-of-transcendent-artistry/

From seeing this exhibition in person:
In one room, there are six large mythological Titians and two portraits, one boy the master himself.
To my eye, three of the Titians out of six are simply amazing, including the newly restored Boston's own "The Rape (should be: Abduction!) of Europa", which is finally hung right at eye level -- something you've never seen before and don't want to miss!! The other two stunners -- "Diana and Actaeon", and "Danae". Also, for comparison, an unforgettable presence in the portrait of "Marye the Queene" by the Dutchman Mor, from same time period, to go with Titian's portrait of Prince Philip (borrowed from El Prado).
The room the Titians are in is just buzzing with open energy! After reading several articles on the show prior to seeing it in person, I did not really know what to expect. Might these nudes appear to exist primarily for display to the "male gaze"..? But "Diana and Actaeon", for example, is rather amazing -- each one of 10 or so figures beautifully drawn and projecting strong energy, and each somehow its own person as expressed through the body... .
Well worth experiencing it all in person!

So glad to have another eye-witness to this remarkable show! So sorry it's not convenient for me to get to it myself!