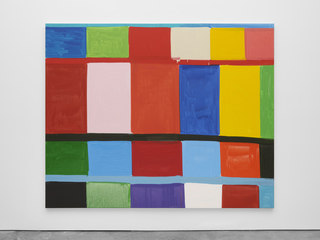 Well, and so Stanley Whitney is still with us.  When I walked by Lisson (on my way to Berry Campbell, further along West 24th Street), I glanced through Lisson's big windows and spied within "Stanley Whitney: Twenty Twenty" (through December 18).  According to the online installation shot accompanying my first review of Whitney's work – discussing his show at Team in 2012 – neither the colors nor the compositions of his larger and more prepossessing paintings have changed that much in the past nine years.   But hey, they look great – in fact, so terrific that I couldn't resist walking right into Lisson to examine them in more detail.

The basic format to the main part of the show is the same: large paintings done in a seductively soft oil on linen.  They depict rows of big, brightly-colored squares or rectangles, between three and five-and-a-half to a row, and with three to four rows stacked one above the other (and separated by narrow lines of contrasting color).  Thus the overall pattern is of a hard-edged, geometric grid, and since Lisson is into minimal art in a big way, they would have you think that Whitney is another Sol LeWitt.

However, as far as I'm concerned, grids have been with us since Picasso and Braque began breaking their images up into "petits cubes" and Mondrian's greatest paintings are all about grids --  so Whitney has a modernist ancestry to his imagery, whether he likes it or not. Moreover, his colors are rich and harmonious enough to make a modernist like me like them – even though minimalism (with the possible exception of Tony Smith) leaves me cold.

In the littler gallery at the back of this show are a number of smaller works in a variety of media and especially on paper.  They are freer in their brushwork and more impetuous in design.  Some of them are not unlike the piece I reproduced with my story on Whitney in 2015, when he was having two big shows at the same time – one uptown at the Studio Museum in Harlem and one in the East Village, at Karma.  I remain glad to see that Whitney wants to make art for a range of tastes and pocketbooks.  But this time it's the biggies in front that stay with me.

In reviewing very similar works at the Studio Museum six years ago, I find that I associated  their imagery with railroad tracks and piles of suitcases.   I can't now imagine why I said that.  This time around, I am reminded far more of stained glass windows.

This is especially true of "Stay Song 98"(2021), the smaller (40-inch square) painting that faces the street and is the painting that lured me indoors, into the gallery. Its grid of squares is only 3 x 3, but it is magical for all that.

On the other hand, "Twenty Twenty" (2020) has a different kind of appeal. Though it too suggests stained glass windows, it is a rectangle not a square, 8 feet high and 10 feet wide.  And its 24 constituent squares are in fact all rectangles, too, with a band of vertical rectangles marching across its upper center.

This stained-glass simile hit me upon first entering the gallery.  When I got around to reading the show's press release, I found that I'm not the only one with this association: Whitney has been commissioned by the Baltimore Museum of Art to make a set of three large-scale stained glass windows.  They are to be installed inside the new Ruth R. Marder Center for Matisse Studies at the museum.

The Baltimore Museum should be a fine place to study Matisse, considering how rich it is in work by that master -- thanks originally to the donations of those Matisse-loving early collectors, Claribel Cone (1864–1929) and Etta Cone (1870–1949).  The installation should also pay tribute to another modernist artist on Whitney's family tree, the great Henri.

The Marder Center is due to open In another two weeks, on December 12.  This should leave Whitney plenty of time to prepare for the next public appearance of his work.  Timed to coincide with the 2022 Venice Biennale, he will open an exhibition at the Palazzo Tiepolo Passi that consists exclusively of work made in Italy—first during five formative years in the mid-1990s when he and his wife were living in Rome, and more recently with the summer studio he now maintains in Parma. He credits his use of "stacked" images to his studies of ancient Roman sarcophagi and brickwork – but his use of color gives those ancient sources a new life.