DRESDEN & IMPERIAL SPLENDOR AT THE MORGAN (PART ONE) 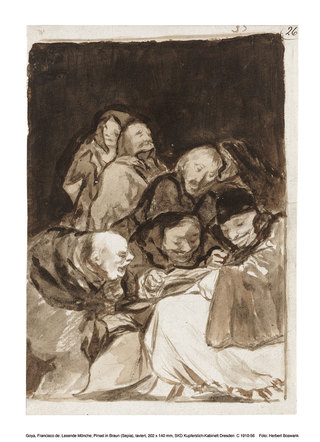 J. Pierpont Morgan (1837-1913), the financier, loved works on paper.  As early as 1890 he was already collecting illuminated, historical and literary manuscripts, early printed books and Old Master drawings and prints in his home on Lower Madison Avenue.  His son, J. Pierpont Morgan, Jr. (1867-1943) turned that home into a public institution in 1924, but neither he nor any of his successors have much altered the basic emphasis of the Morgan Library and Museum from historical works on paper.

Sad to say, in recent years the museum seems to have felt obliged to display a small amount of typically execrable postmodernist work, but the two special exhibitions currently on view are both historical and excellent. The first is "Van Eyck to Mondrian: 300 Years of Collecting in Dresden" and the second is "Imperial Splendor: The Art of the Book in the Holy Roman Empire, ca. 800- 1500" (both through January 23, 2022).

The first of these two shows displays work from the Kupferstich-Kabinett in Dresden. This is one of the oldest museums in the world devoted to works on paper, having been founded in 1720 by Augustus II the Strong, Elector of Saxony.  Over the three centuries since, it has added to its holdings and the current show reflects this, with about 60 drawings made between the 16th and 20th centuries.

The level of craftsmanship is for the most part exquisite.   There are many very beautiful works in this display, but the selection reflects the relative isolation of Dresden.  Situated as it is in the northeastern part of today's Germany (but south of Berlin), its museum's collection emphasizes work by artists of Germanic descent from The Low Countries and Germany down through Austria.  However, the selection of Italian artists is scanty and the only French ones I spotted were Watteau  and Henri de Toulouse-Lautrec – the latter about as radical an artist as the Viennese "modern" with whom he is paired – Gustav Klimt.

Still, the Germanic tradition is not to be sneered at, particularly when it comes to graphics.  High on my list of favorites in this show were the earliest, beginning with the remarkable "Portrait of an Older Man" (ca. 1435-40).  It was done by Jan Van  Eyck, the Netherlandish master from the Northern European Renaissance, as a primary study for an oil on panel now in the Kunsthistorisches Museum in Vienna. Also memorable were the "Portrait of Charles de Solier, Comte de Morette" (1534-35) by Hans Holbein the Younger, a native of Germany who first made his mark in Switzerland but ultimately gravitated to the court of Henry VIII in England.

The show also has the requisite pair of Germanic masters from the baroque era:  the Dutch Rembrandt Van Rijn and the Flemish Peter Paul Rubens.  The work by Rubens calls attention to the artist's studies in Rome, being a dynamically muscular study of the torso and arm of Laocoön, the Trojan priest being strangled by snakes with his two sons in the ancient Greek statue in the Vatican Museum.  But the two Rembrandts – very vigorous studies -- are no less classical.  One depicts Ganymede, a Trojan boy-child, being carried off by Zeus, king of the gods, in the form of an eagle, as told by Homer in "The Iliad." The other shows Actaeon, a young mortal hunter, being turned into a stag by the goddess Diana as punishment for spying on her in her bath, as told by Ovid, in "Metamorphoses."

Moving on up to the 19th and 20th centuries, we have a couple of nice Romantic landscape studies by Caspar David Friedrich, who came from a northern city in Germany even more remote than Dresden.  But aside from that lone Toulouse-Lautrec there is nothing to show that France in the19th and early 20th centuries was painting up a storm. And there are only two drawings by members of Die Brücke, Germany's own moment of early 20th century modernism, despite the fact that the movement was headquartered in its formative years in Dresden.

To be sure, as the literature accompanying this show points out, all of these early moderns to the Nazis were "degenerate" art, to be "cleaned" out of German museums in the1930s.  Nor would there have been much opportunity to rebuild the modernist part of the collection of the Kupferstich-Kabinett in the 46 years following World War II: Dresden was located in East Germany, where the Communists in charge would have favored only Soviet-style realism, if that.

Still, it's been 32 years since the Berlin Wall went down, and one wonders whether a little something couldn't have been done since then to fill in the geographic and chronological gaps in this otherwise laudable collection.

True, the show also includes a curious work by the Dutchman Mondrian – not a real painting,   but a never-realized design for an interior decorating job requested by a local supporter of the arts.   Also squeezed in were pictures by two German artists, A. R. Penke and Georg Baselitz,  who became internationally famous in the 1980s as "neo-expressionists."  None of this cuts any ice with me.

As it stands, two of the best and most "modern" works here are both savagely satirical. One is by Otto Dix, a leader in the German "Neue Sachlichkeit" of the 1920s.   Dix's picture was done in 1923 and portrays two veterans of World War I, hideously disfigured by combat wounds.  This unlovely image is titled "In Memory of the Glorious Time."

The other is by Goya, one of his many private drawings.  When I first glanced at it, I thought it was a group of monsters, huddled over a meal of some sort, possibly a corpse. Then I looked closer, and saw that it was monks, reading from and cackling over a book that was presumably anything but sacred – though the title of the drawing is a noncommittal "Monks Reading" (ca, 1812 -20)  What an image to wash away all those sentimentall memories of Christmas!