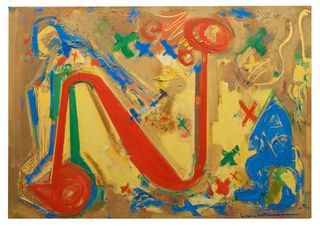 Hans Hofmann (1880-1966), Red Serpent - Version I, 1949. Oil on canvas, 42 x 60 inches, Promised Gift to The Phillips Collection, Washington, DC. Courtesy Freedmanart.
Every exhibition arouses expectations. Depending on those expectations, gallery-goers may – or may not – decide to go see it. This post is about two exhibitions which have aroused – and may very likely still arouse—different expectations. Yet in neither case did (or do) the expectations correspond to the realities of the shows themselves. Read More
5 Comments

Piri, about your piece on the Luther Brady collection: your conflating a review of an exhibition with unproven allegations against the director of the gallery is unconscionable. Make up your mind what you are writing about. If you want to indulge in ad hominem discussions, why not take into account the remarkable man who put together the collection on view with care and discernment -- two characteristics not evidenced by the way you decided to frame and link both parts of the piece. You ought to be ashamed of yourself.

Thank you, Karen, for reading my column. This is the first clue I’ve had in years that you do. I wish you’d read it more carefully, and tried to understand what I was trying to do. There is no reference in your comment to the title, the conclusion, or the first review of the two in the posting – all of which were intended to put that second review into its proper perspective. What I am saying is that esthetics are one thing, and material circumstances are another, and that the first is more important than the second. The first review concerns a photography collection that would have been controversial back in the 1960s, when Princeton acquired it, but can now be viewed upon the basis of its esthetic merits. The second review concerns a show staged by a gallerist who is currently controversial, but the show is still “enormously enjoyable” and if readers are capable of taking the long view, they will want to see it, too. My feeling is that many people know about the lawsuits, and not enough of them know about the gallery, or the fine shows it has staged – and continues to stage. My hope was that in writing about the two together, some people who knew about the lawsuits but not about the gallery might be encouraged to go see the gallery, too. Re “unproven allegations”: I will concede that in the interests of keeping my discussion of the lawsuits as brief as possible,I may have unintentionally abbreviated it too much. I have now revised the passage to make what is essentially an ongoing situation as clear as possible. I certainly have no wish to try this case out of court.

I don't want to spend time on a wrangle with you but you seem not to understand that starting a review of any exhibition that you claim to be enthusiastic about the way you did is mean-spirited and self-aggrandizing. In essence you're saying "there are bad things associated with these exhibitions but I'm so magnanimous that I can rise above them and enjoy the shows." What's the point of that? If you really cared about the art, you'd have skipped the rest. Sorry, but the ending doesn't obviate the lack of necessity of the introductory conceit you're so proud of.

I don't want to spend time wrangling with you, either. I think you misunderstand what I was trying to say, and the point I was trying to make, but I have other things to deal with just now, so I hope to get back to you later. Also hope you have a happy Thanksgiving!

Rested and refreshed, I have concluded that if I wasn’t getting through to you, maybe some of my other readers have been having problems with this piece, too. Accordingly, I have rewritten it, and – to the extent that it may prove more widely understood – I am indebted to you for prompting this revision. You are still not going to like it, as I still mention Ann Freedman’s legal problems in addition to discussing the high quality of the Brady show. But you have your way of writing about art, and I have mine—which you are evidently unfamiliar with. That’s perfectly understandable, of course. We’re all busy people, and I’ve read very few of your reviews, either, though I do run across other writing by you in making my rounds of the galleries. In fact, I quoted a splendidly suggestive statement by you regarding Willard Boepple’s work from Lori Bookstein’ s press release for his last show, and I found very useful your catalog for Tower 49’s sculpture exhibition this past summer. If you had read more of my writing, though, you would know that I frequently insert (and identify) in my reviews all kinds of information that other critics don’t---press releases, wall texts, other reviews, my own research (gathered online, on foot and wherever else I may come across relevant material)--as well as the kind of “art news” normally covered by reporters on daily papers or feature writers in magazines as opposed to art critics (auction prices, prizes, forgeries, etc.). This is my way of helping my readers to better understand the wider world of art, and enabling them to appreciate why the more specific kinds of art we all admire don’t get more of the recognition they deserve. Last spring, I did two long pieces prompted by the annual conference of the College Art Association in February. Both were awfully diffuse, and I can forgive anybody who didn’t read all the way through them, but one point I did make is that my background differs from that of most of the people who write about art in that I started out in the major media – unlike most art critics, who came up through the art magazines. In the major media, there is no question about who the critic writes for. It’s not the person (s) who created the subject of that review, nor the person(s) who made the work available to the consumer, but the consumer of the art form himself (or herself). This is who wants and needs to know whether an art work is worth going to see and/or pay for--regardless of whether it’s a book, a movie, a play or an example of the visual arts. Although most major-media critics in all these areas love the field they write about, that doesn’t mean they find every example of it equally perfect—the result being that any really discerning critic inevitably ruffles feathers. Still, to repeat what I said last spring: nowhere is it written that the ability to win popularity contests is part of a critic’s job description. You just have to hope somebody respects what you write.