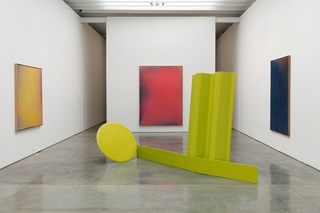 Installation view of "Caro & Olitski: 1965-1968, Painted Sculptures and the Bennington Sprays," Paul Kasmin Gallery, 515 West 27th Street, through October 25. Photo by: Christopher Stach/Paul Kasmin Gallery.
Paul Kasmin, son of the Englishman John (aka “Kas”), is nothing if not ambitious. According to the Wikipedia “stub” dedicated to his gallery, he opened first in SoHo in 1989, but really only in the last few years has he become a major player in Chelsea, with three venues & a stimulating mix of historic & contemporary artists.

This fall, all three of his venues opened the season with what can be read as a progression tracing the history of modernism in America, and thereby hopefully serving to nail down color-field painting and sculpture as its logical apogee.  Read More
Be the first to comment