MAC AND MARK AT THE NEUE GALERIE 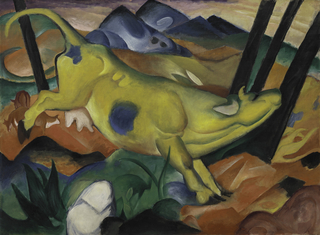 "Mac and Mark" is the sacrilegious way I refer to two excellent painters associated with German Expressionism, Franz Marc (1880-1916) and August Macke (1887-1914). Together with Wassily Kandinsky, Gabrielle Münter, and other German and émigré artists based in & around Munich, these two Germans formed the group that exhibited in 1911 and 1912 under the name of Der Blaue Reiter, and published Der Blaue Reiter Almanac in 1912.  Both Marc and Macke – good friends with each other -- were killed in action during World War I, so to commemorate these promising careers cut short by forces beyond their control, the Neue Galerie is staging a highly colorful and engaging show, "Franz Marc and August Macke: 1909-1914"  (through January 21). Read More