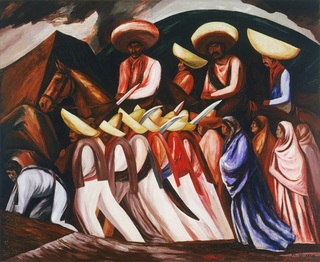 At the Whitney Museum of American Art we have "Vida Americana: Mexican  Muralists Remake American Art, 1925-1945" (through January 31, 2021).  This is a large and diverse exhibition of approximately 200 works by 60 artists from Mexico and the United States. It aims to show how that curious blend of populism and modernism that developed in Mexico in the wake of its early 20th century political revolution influenced artists in the United States in the period between 1925 and 1945.

Visually, there is a lot to like in this show, and I recommend it for that reason.  But don't go expecting any attempt to recreate the full range of U.S. art & culture in the period under discussion. Rather, we get the usual conformity to 21st century verities.

Mexican Modernism & Populism: "Paint the Revolution" at the Philadelphia Museum 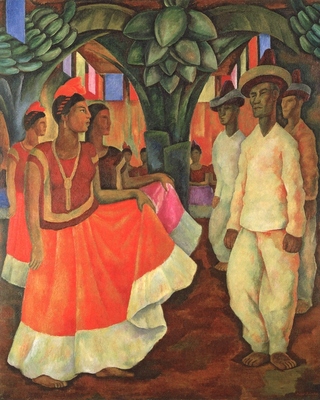 Diego Rivera, Dance in Tehuantepec, 1928. Oil on canvas, 6 feet 6-3/8 inches x 63-3/4 inches (199 x 162 cm). Private Collection. © Banco de México Diego Rivera Frida Kahlo Museums Trust, Mexico, D.F./Artists Rights Society (ARS), New York.
Folks, if you want a grand way to spend New Year’s, may I recommend you go to see “Paint the Revolution: Mexican Modernism, 1910-1950,” at the Philadelphia Museum of Art. This gargantuan exhibition of hundreds of easel paintings, watercolors, murals, photographs, and graphics grandly demonstrates how a radical, though not highly-industrialized, society in the first half of the 20th century managed to unite two movements often seen as antitheses—modernism and populism. The museum is open on New Year’s Day, and this show will end its run there on January 8 (you can still see it from February to April at the Museo del Palacio de Bellas Artes in Mexico City)..  Read More
Be the first to comment