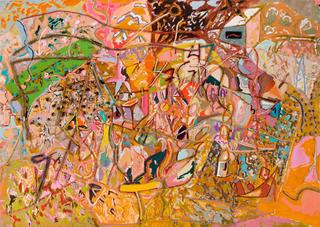 At Yares Art, we have "Larry Poons: First Thought, Best Thought – The Particle Paintings (1996-2002)" (through February 15, 2020).  This is not the first time I have reviewed Poons's work from this period, but I liked it a little better than I did the last time I saw it – in a show at Salander O'Reilly in February 2001.  It's cheerful, colorful and – to borrow a word from Ken Johnson, the critic from the New York Times who liked that show a lot—it's playful.  Read More

THREE PIERS INSTEAD OF TWO: THE 2019 ARMORY SHOW 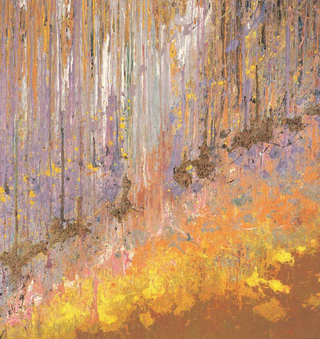 It looked like curtains for the 2019 Armory Show. Just over a week before it was scheduled to open on Piers 92 and 94 on the Hudson River, a city inspection revealed that Pier 92 was too dilapidated to support the expected crowds, and it looked for a moment as though the whole show would have to be closed down.  However, the show's resourceful organizers managed to oust Volta, a rival art fair, from neighboring Pier 90, and so The Armory Show was able to open on time – with all the 60 booths originally intended for Pier 92 relocated to Pier 90.  The bulk of the show –135 booths – were as they had been in previous years – located on Pier 94. Pier 92 was consigned to a lounge and restaurant area – which presumably wouldn't overtax its weight-bearing potential. Read More

Thank You Piri for taking me to the fairs! As always, I enjoy your commentary and wit.

"THE PRICE OF EVERYTHING," OR, "DUMBO" V. DA VINCI 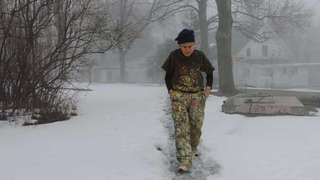 Larry Poons in "The Price of Everything"

One major topic of gossip these past few months in the little sub-community of the art world that I inhabit has been the 98-minute documentary entitled "The Price of Everything." The main reason we are interested is that for all practical purposes, its hero is our own Larry Poons, who has thus emerged at the unlikely age of 81 as a movie star. But the film has other attractions as well. 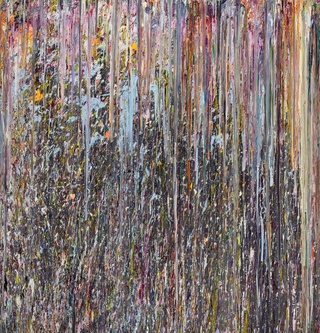 Larry Poons (b. 1937). Rain of Terror, 1977. Acrylic on canvas, 111 1/2 x 108 inches (283.2 x 274.3cm). (Inv# 2953). Courtesy Yares Art.
At the tender age of 81, Larry Poons keeps on having so many shows that I have difficulty keeping up with him. But the last solo exhibition of his that I reviewed – exactly a year ago, and also at Yares Art– placed the emphasis on his recent paintings, and allotted only a smaller and less conspicuous space to the earlier ones. This time the shoe is on the other foot.
Read More
Be the first to comment 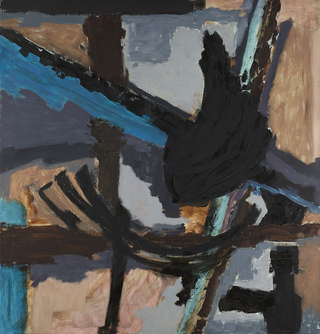 Judith Godwin, Betrayal, 1976. Oil on canvas, 50 x 48 inches. Courtesy Berry Campbell.
On a recent trip to Chelsea, I found one big show & two lesser shows that I’d recommend, in whole or at least in part. The lesser shows with some work I liked were “Etel Adnan, Ione Saldanha & Carolee Schneemann: Of the Self and of the Other,” at Galerie Lelong & Co, (closed August 3), and the “Summer Group Show” at Sundaram Tagore (through September 1). The big show where I liked practically everything I saw was "Summer Selections," at Berry Campbell (through August 17).  Read More
Be the first to comment 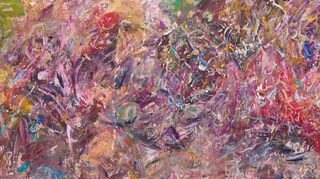 Larry Poons (b. 1937). Dimension, 2017. Acrylic on canvas, 64 x 114 inches. Courtesy Yares Art.
On October 1, Larry Poons will be celebrating his 80th birthday. It doesn’t seem possible somehow. When I saw him at the opening of “Larry Poons: Momentum” (through October 28) at Yares on Fifth Avenue, he looked just as wiry and energetic as ever.

His latest paintings, too, bespoke an-ever youthful enthusiasm, as well as his hallmark medley of bright, mellifluous colors in delicately brushy configurations suggestive of floral motifs (I’m not the first to be reminded by this latest style of his of the lily-pads of Monet).  Read More
1 Comments

While grabbing from Monet's lily-pads is an honorable and fertile thing to do that does not compromise originality (could enhance it), I just don't see it in DIMENSION. It's not big enough, restricted enough, dull enough, static enough, nor subdued enough. It's awfully good, though.

DUBUFFET & POONS AT LORETTA HOWARD: A MATTER OF MATTER 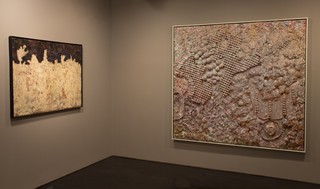 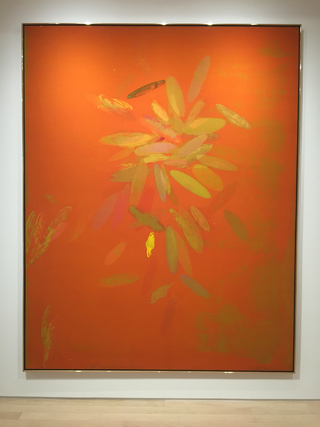 THE GRAVITY OF A VOLCANO: POONS AT LORETTA HOWARD

Larry Poons, Loose Change, 1977. Acrylic on canvas, 94 x 43 1/2 inches. Courtesy Loretta Howard Gallery.
Entering Loretta Howard just now is like walking into the middle of Niagara Falls, or being confronted by the descending lava of a volcano—all as frozen for eternity by a modernist photographer like Brassaï, whose studies of Picasso’s sculpture from the 1930s and 40s currently grace the Picasso sculpture show at MoMA. Read More
1 Comments

Wow! Does this bring back ghosts. While a art student at Syracuse U I meet Poons at the sculpture dept. bldg.(the Continental Can factory down by the bus station) in1973. He was working in clay - large format 2D clay reliefs mounted on plywood. I'll never forget watching as he stood, pondered and pushed/placed large brick shaped clay into the ground. I was absolutely con founded and facinateted with what in the hell he was doing. 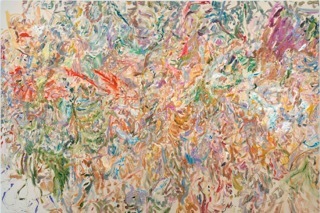 Larry Poons. Angle of Landscape, 2014. Acrylic on canvas, 64 5/8 x 97 3/4 inches. Courtesy Danese/Corey.
It is truly amazing, how fertile is the invention of Larry Poons, still going strong at 77. Even more amazing is how successful are so many of the works in “Larry Poons: New Paintings” at Danese/Corey (through May 29).

Thanks for another insightful write up. I found this group of paintings to be exciting and full of light, action and color - a feast for the eyes. Larry Poons continues to create paintings that one could look at every day and find enjoyment.